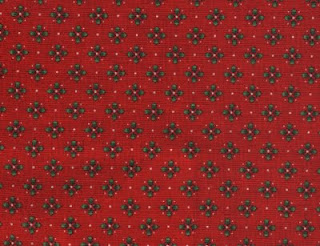 Scarey isn't it, the fact that Christmas is not too far away. I attended my local Sewing Guild group today & we were making Christmas goodies. I wasn't really sure what but I went along with a whole bag of bits & pieces. The above piece of fabric was just one that I went with. Watch this space to see what I do with it.
at 4:13 pm No comments:

Away from the stitching now just for a bit. The news headlines lately have been full of a corageous young girl, Jessica Watson, from Queensland, just 16 years old, & off on an andventure of a lifetime. Her ambition is to be the youngest to sail solo, non stop & unassisted, around the world. Jessica has her own blog so that we can all follow her progress. As a mother, I am not sure I could handle my child of 16 doing something like this, but then it depends on the preparation that has gone ito it. Brave parents for letting her do something like this. I will be following her progress with anticipation, and wish her well.
at 8:30 am No comments:

Email ThisBlogThis!Share to TwitterShare to FacebookShare to Pinterest
Labels: Adventures 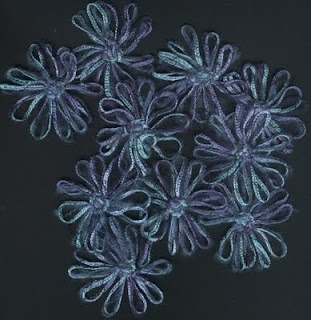 It's been a while since I posted anything here. I have been stitching though, I stitch every day in one way shape or form, well at least have some form of textile encounter.

I have been slowly working on a major piece of counted thread work, now patiently waiting to be laced into a frame ready for some cutwork to happen. I have also knitted a scarf ( started purely out of boredom when my home was invaded with football final fenatics), nothing fancy mind you, just a K2tog, wool over needle, repeat pattern in a gorgeous colour textured yarn, now waiting patiently for next winter.
Hardanger Christmas decorations have also been on the stitching list. I've made 4 so far, all to be given to a charity which my local embroidery group has orgainised. The decorations are beautiful & I want to make some for me.
Then there has been the bobbin lace, slowly but surely my next piece is happening. Just a bookmark, but it is one that I have sort of "designed" myself. I say designed, but it really is only an edge pattern I have made before, mirrored, and added some tallies to. It is nearly finished, so maybe there might be a pic here in the not so distant future.
When I was knitting the scarf, I was having all these ideas as to what to do with all the yarn that was in the bag, one of which was to pull out my Mum's daisy wheel & see how many I could make till I got bored. It's a bag of mixed yarns, left over from other projects, and I wanted to experiment & see how the textured yarns made up into daisies. I had only ever made them with baby yarn before. So far I have made 40 daisues, experimented with two different yarns, ( ditched one) and have a sort of an idea as to what I will do with them all. You will have to come back another time to see what I do with them. Some of them are in the pic above.
Now, for those of you that have read this far, I need you all to do me a favour & leave a comment on how this page is loading. I have been having a **** of a time with it over the last few days & don't know why. I have had some fun with backgrounds & thought it may have been that, so I ditched those with no improvement. I have also ditched some other links which I added in the last week & thought it may have been, ( not that I wanted to as they were lace links), and still no improvement. I am still having hassles so I thought I would add another post & see what happens then. Feedback from readers about how the page is loading elsewhere will be greatly appreciated and let me make decisions as to what to do about the problem.
Thanks all for taking the time to read this far and for making comments.
-------------------------------------------------------------------------
OK, so a few hours have passed since I posted about my problem. Those people that know me know that I don't stop until the problem is solved. Well, the problem is now solved. I "phoned a friend" to see if they were having the same problem as me with this page & yes, they were. So that meant that something had to be eliminated off the page. So I have cleared a few things & wallah! no more problem. Good stuff! At least I didn't have to eliminate all my places to visit. So my page might look a little empty down the side bar, but at least it will now load & you can all read what I have been up to.
at 1:48 pm No comments: