Lace For a Friend 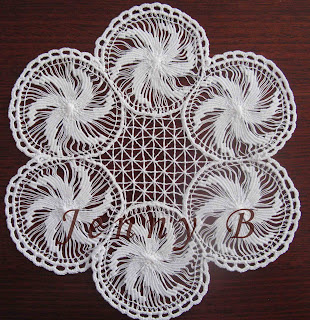 Well, it's been a while since I have posted any new work here, so I thought I would show you all what I have been working on the last few months.

I have been obsessed lately with teneriffe lace, and as well have a friend with an "0" birthday. I wanted to make her something special, & thought of a few different things, and settled on this. At first I just stared making the motifs in a thread that I had been using, as I had plenty of it & I didn't know how much I would need. I was also using the same sized wheel as before, but soon scrapped both the thread size & wheel size as the whole project was going to take me way too long and be way too big. So back to the drawing board I went.

I knew roughly what design I wanted, & approximate size, but had to work out the individual circle size. I also wanted the circles to touch, but how to physically work out a pattern? I knew it was a geometry thing but it took me a while to get my head around it and even then I needed some help.

Once the maths was worked out, I knew my circle size & could try another thread, which in the end was better as one motif only took me two days to do. So with six motifs complete, I then had to think about how I was going to join them. I did some reading, & drew on my needle-lace experience to join them together & create the filling in the center.

I am not sure if there is a right or wrong way of doing this, but it was my very first attempt and for the next one it may happen differently. Just for the record my friend has had her birthday & this piece of lace is now in her possession.
at 11:57 am 5 comments: Links to this post 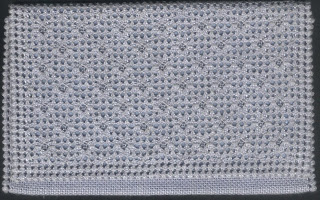 Over time, people come into our lives & touch our hearts. Quite often it is too late before we realise just how much they mean to us. The little pouch above has been made by one such person, an exquisite stitcher, who gave her knowledge freely to anyone who would listen. May you rest in peace, knowing that your stitching legacy is alive & well.