Back in late February & early March I made some bookmarks to say thankyou to some special people. It was a spur of the moment decision to make them, and as I was going away for a few weeks R & R, I packed some of my own hand dyed linen, what I thought was some co-ordinating threads to stitch with, & just one book for inspiration. They have all been recieved now so I can show you all what I did.

This was the first one, and I started by buttonholing the edge first, no counting. Then I decided I had better count what threads I had to work out what would fit in. The book I had taken with me was Gay Eaton's "Wessex Stitchery", so I found a motif that I liked, worked out placement & started stitching. I could fit three motifs in the space, but they needed something to link them together, so the back stitch borders were born. There are three in all, one is in a fine gold thread which is not really clear in this pic.

The second one I made was this pink one. After having fun trying to fit patterns in the last one by not counting the edge, I decided to count fours on this one, that way I would be able to fit in lots. Mmmmmm............. So the buttonhole stitch edge was first, and all the while it screamed "drawn thead " at me, so the satin stitch & eyelets were born. The coral knot channels were first, then the needlewoven center channel. It was fun, because by the time I got to working the center channel, I had decided I wanted to mix up colours & patterns, & this is where my counting by fours didn't work, hence the dominant three needle woven bars in the center. In retrospect, I wish I had of placed this section one block lower, it would have made it more interesting. Maybe next time. The back stitching in burgandy was an after thought to bring out the burgandy backing.

Finally we have bookmark number three. This one was born following a day with my creative stitching friends. On the day, one of our members had us closely looking at pieces of work with a list of questions. I had picked out one piece from across the room which I thought was a piece of counted thread work, but on closer inspection found to be smocking. The patterns were interesting, so from across the room I drew in my sketchbook the patterns that I saw. It was these sketches that I tried to interpret into this bookmark, but they didn't quite work. All that did was the yellow line. So the yellow line got repeated, stitches added in between, & thread colours changed as I felt, usually when they ran out in the needle. The extra yellow lines were added to give balance.

So the bookmarks have all been recieved, & I had some creative fun. They are all original
one-0fs that I am proud of & I know the recipients are enjoying.
at 7:58 am 4 comments: Links to this post 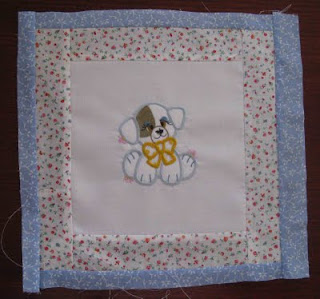 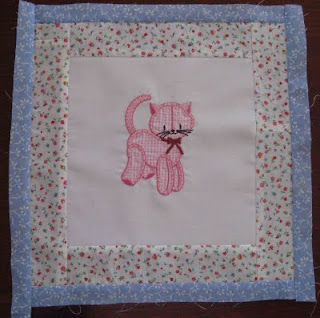 My local sewing group meets this week & one of the tasks I promised to do was to add some fabric to these cute little digitised animals. The blocks are to be a certain size so they can be cut down & patch-worked together with sashings. The end result will be a quilt to be donated to charity.

My sewing machine nearly had a fit this morning it has been so long. Poor girl has been neglected after all that wedding sewing I did a while back. Must get back into it & do my quilts that are hanging around.
at 12:12 pm 2 comments: Links to this post

Last Saturday was the monthly meeting of my creative stitching group. It was a coolish, very wet day( it absolutely poured!) so what better way to spend it than stitching with friends.

Part of the day was spent study a particular embroidered piece, in particular how the stitcher had used her stitches to effect. So the afternoon was spent playing with stitches on a doodle cloth. As it happened, my doodle cloth was a piece of scrap linen left over from something, and my stitch play has turned into this bookmark. 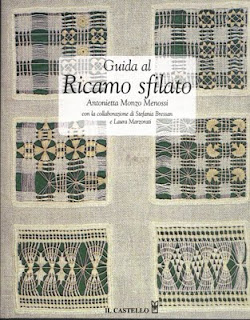 The latest edition to my library. It's in Italian, but who needs to read when the diagrams & photos are so clear? Watch this space!
at 3:33 pm 1 comment: Links to this post