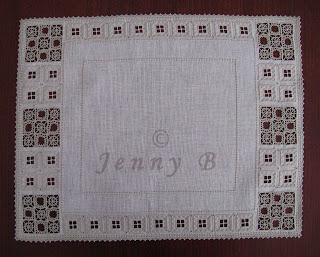 Back in September last year I had the absolute pleasure of participating in a workshop by Christine P. Bishop. The workshop was on Lefkara lace, something that really got my toes curling and made me weak at the knees. The workshop notes stipulated fabric, fabric size, thread, and even colour. Being the good little student that I am, I complied with the tutors wishes.

Behold my finished piece! It may be similar to the tutor's, but I have changed and added a few things to make it my own.

The piece we were supposed to do only included the end border, on one end only. On the day of the workshop I had already decided that I would do it at both ends. Then as I worked the design, I thought I would put the design all the way around the edge.
So I started counting and thread lining, only to find the design wouldn't fit along the length of the piece of fabric. I was only about 20 threads short. Bugger! So disappointing! If only I hadn't cut the piece of linen to the specified size! Oh well, I just had to re-think. 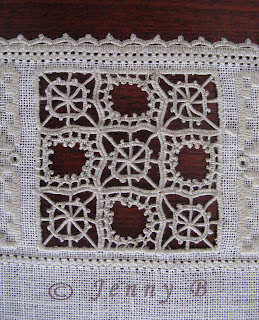 So re-think I did, and I took only part of the original design and repeated it all along the longer side. Personally I think it worked out OK.

The next thing I did was to change the hem. The instructions said to buttonhole over 3 threads. Everything else in the design was over three threads, so of course the hem was too. From a counting and design point of view I could understand it, but I was thinking of strength and changed it to stitch over four threads. I did little samples on the edges of my fabric to test it out. It looked OK, and I couldn't see how it would effect the needle lace on the edge. So my hem is stitched over four threads.

Then I changed the needle lace at the edge. The original design only had the needle lace along one end, and I wanted it all the way around. I also wanted it different, and I had made up my mind to make it different on the day of the workshop. I had plans of doing something more elaborate than what I actually did, but the best laid plans can always be changed! I settled for simple loops with an added picot. It's still different than the tutor's.

The final change came as all the borders were being finished. I felt that the space in the center of the piece was too big and open, and it needed  'something' to balance it all out. I had placed a row of four sided stitch just inside the borders to 'hold' them together, so I just repeated another row of four sided stitch a little further in, which I think has worked beautifully.

So my Lefkara table mat is finished. Would I do another piece? Maybe one day. I still have the other end of the piece of linen left from this piece. Watch this space!