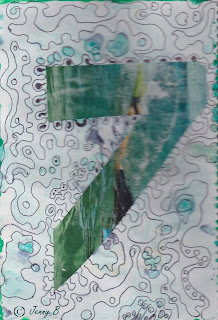 For my art journal page seven I did something different again.

I first prepared the page with mod podge, then gave it a sponge  with a wash of aqua and white paint. The page became quite wet again, so this time I sprinkled some rock salt onto the page and let it dry. A bit messy, but hey, it wasn't a blank page!

I had plans of cutting my numbers this time from a magazine page that I  had saved. So once the page was dry, I drew my numbers in the magazine page, cut them out and glued them to my journal page.

I then began to draw lines with a  black fine line felt tipped pen. At first I outlined the green blobs that had formed, then just added in wavy lines to connect them all together.

This page has been finished for some time, and I must admit I have been a bit slack with my art journaling. My knitting has taken over. I'll try to get back to it every day.
at 9:36 am No comments: Links to this post 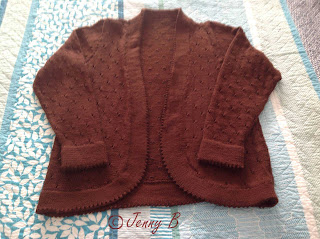 Behold, my new cardigan. This one began with inspiration on one of our trips away a few years ago. We were travelling from the Northeren Tablelands of NSW down to the coast, and stopped for a break in a little town not far from the Queensland border. The main street hugged the main highway, and it took no time at all to walk up one side and down the other. All the doors to the shops were closed, and it took no time at all to work out why. It was a main highway after all, and the sheep trucks travelling this highway were common. Enough said!

We did open the doors and walk in, and one was such a delight. It was a little haberdashery shop that sold everything from curtain fabric to knitting yarn. When we walked in, what caught my eye was a gorgeous cardigan on display. It was burgundy, and had a ruffle around the neck, down the front, curved at the hem, and at the hem of each sleeve. The ruffle was in a feather and fan pattern in a variegated burgundy yarn. Just gorgeous, and I wanted one!

We were on a time limit, and had yet to still make our way to the coast, so I didn't ask the shop attendant for the pattern. I figured it was current, and would be readily available anywhere. Mmmmm........ not so. When I came home I searched everywhere, even on line, and could not find a pattern similar. The closest I found was on another trip away, in another little country town, in another little haberdashery shop. This pattern was for a short sleeve cardigan, curved at the hem, but with a rib finish. It was a base to work from, I could lengthen the sleeves, lengthen the whole garment, and add the ruffle to finish it off.

So then the fun began in looking for yarn. I ended up with this Morris Empire "Clove" 100% merino yarn, and  a Noro "Silk Garden Lite" 45% silk, 45% mohair 10% wool yarn in a variegated for the ruffle. After playing with the variegated in a sample of feather & fan, I decided to do the ruffle in the Clove, so went back to buy more. Then, after playing and thinking some more, I decided to eliminate the ruffle across the bottom at the back, and just have it down the front and on the sleeves, but that meant that I had to finish the back some other way, I didn't want a plain rib joining with a variegated ruffle at the side seam, so opted instead for a picot hem. The pattern was stocking stitch, boring, so I decided to add some interest, and dropped an eyelet in now and again in a pattern. The back was finished and was looking great.

Then came the front, which was much trickier. I can't remember the last cardigan I made, and if I did ever make one it would have had a straight front, not a curved one like this. All was going good, and I had created the bottom curve, and managed to drop the eyelets in at the same level and in the same pattern as the back. Then came the plain sailing up the front with no increases for a while. The Problem was that I had made the back longer than the pattern, without taking note of how many extra rows I had done. The front needed to be the same length, but it had a ruffle finish where the back had a hem, and I need to allow for this. It meant that I had to sit quiet, count rows, and work it all out. So it got put in the "too hard basket" to sort out later. I might add here it that it sat in that basket for quite some time,

Back in February I had finished off another jumper, and I had enjoyed the knitting so much I decided it was time to pull this one out and finish it. It was at this point that I decided that I really liked the picots combined with the eyelets, so decided to put a band with a picot edge around the front, and to do the same hem on the sleeves.

It is now finished, not quite as I first imagined, but it is warm and very wearable. As for the rounded bottom, I think I would only do that again for something lighter, like a 100% cotton in a short sleeve.

Now I have yarn left, about five balls of the 'Clove', and four balls of the Noro. Watch this space to see what happens with them.
at 11:54 am No comments: Links to this post