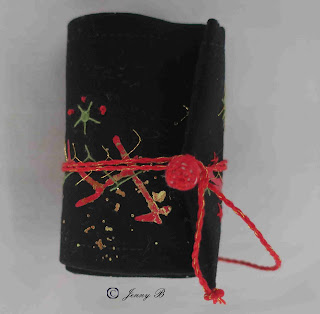 Nearly a week ago now I spent the day with my creative stitching group Stitchers Plus. They are such a fun group of people and very, very creative. This year we have decided to each take a day and present a little challenge to the group. This little needle roll is the result of one of those challenges.

The challenge was set by Annette. We were each given a little kit that contained the basic makings of this little needle roll. Included were two needles already threaded with fuseble thread, and a blindfold. Yes,  a blindfold!  We had to stitch with the thread provided with the blindfold on! Now that certainly was a first,  a fun and very interesting exercise! Below was the result of my stitching by feel only. Later I added some more to fill in the gaps.

Then came some fun with the iron. We had a few different foiling sheets to choose from, and I actually used two different colours on my sample which produced an interesting result.

That was as much as I got done on this piece on the day, but when I came home I picked out some threads from my stash and started to stitch.. I added feather stitches, french knots and woven wheels.

I also added a handmade toggle and twisted cord for closure.

Such a fun day,  with a very creative little needle roll as an end result. 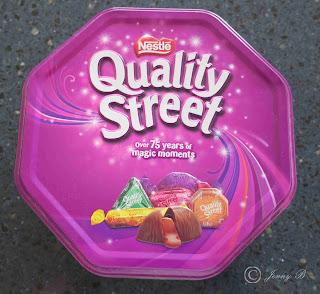 This hexagonal toffee tin is number sixteen in my collection of tins. It is one I have bought, purely for food storage.

It's a few years ago now, we were away on holidays, spending time up the coast for Christmas. I wanted to make some rocky road to add to the Christmas table, but because we were away from home, I needed a container to store it in. I could have opted for a plastic one, but this was a male member of the family's  idea. It was his thought that he could eat all the toffees first, then I could have the tin for storage.

There is lots of information on the base, including a date of 2013. There is also a note telling me the tin and all it's contents is  recyclable. Mmmmm......... not likely, not while I am still alive any way.

I did some research on the tin, not finding any for sale. What I did read though is that the confectionery company that makes the toffees is now using plastic tubs!

My tin is empty most of the time, but is does get used for food storage occasionally.
at 9:04 am No comments: Links to this post 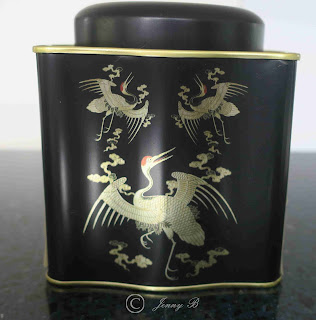 This tea tin in my collection is number fifteen. It is a fairly recent addition, one I bought from a local Asian grocery store when I was looking for a different flavoured tea. The tea in this one is long gone too, it was an Oolong tea, A Chinese tea supposedly with lots of health benefits. 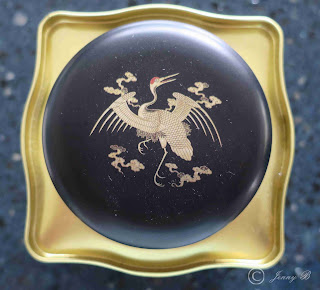 The tin itself is wonderful, it has a wonderful shape, gorgeous colouring's, and gorgeous design on the tin lid and sided. On the bottom there are lots of labels, and a date of 2021. That's a best before date, so we can tell the tin is fairly recent.

They are available for sale on the net, though at this stage they are being sold with tea still inside.

So what does this tin hold? At present is is still being pretty on top of my Mum's china cabinet with some of my other tins keeping it company. 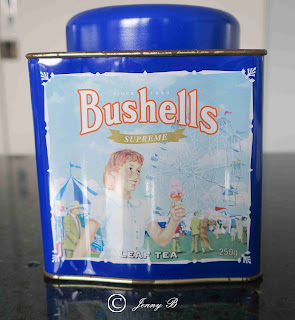 Another tea tin in my collection today. This one is number fourteen in my collection, and is one I purchased full of tea over ten years ago. The tea inside is long gone, and the tin still remains empty.

This one is apparently one of three in a series  called "Australian Communities" to collect. I only have this one. It is dated a 'limited Edition 2005'

These are for sale on e-bay and Gumtree and I am amazed at how much they are selling for. Mine is a little rusty on the outside, though still clean and rust free on the inside. I really should use it for something, but is just sits as decoration on top of my Mum's old china cabinet.
at 10:30 am No comments: Links to this post 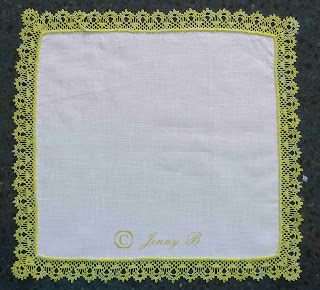 Check out my latest handkerchief edge!

I wanted to do another hankie edge, something easier than the last one, so I checked out the patterns I had, and chose this one. I had not done it, but it looked easy enough. Famous last words!

I set about drawing up my pricking, and printed out just a small section around a corner to practice it first. Mmmm........... what I thought was going to be easy turned into a challenge. No matter what  I tried, I could not figure it out. Mmm....... What to do.

I thought about waiting for my next lace meeting and asking someone, but that was ages away. Then I thought I could ask someone on the lace related Facebook groups that I am on. I got lots of answers back, some helped, some didn't, but the one that helped the most was the one that told me it was triangular ground.

Triangular Ground? What is that? So I pulled out my lace books and did some research. Yes I found it, but it didn't really help. What now? Frustration plus!

One of my family members suggested You Tube, everything is on You Tube! So I checked out You Tube, and found a video of how to work two different types of triangular ground. Which one was I supposed to do? There were a number of videos, and they were so good they soon had me sorted which one I had to do. There was only one hitch, The video was demonstrating working the triangular ground in one direction, and I had to work it in the opposite direction.

There was much to and froing from my PC to my lace pillow, much note taking, and finally I produced my little sample. I had to check my notes to make sure that I could not only read them, but follow them again at a later date.

Now the hankie edging was ready to begin. It is worked in Gutermann Sulky No 30 thread, which was beautiful to work with. There were no breakages! Not one!, and  it took approximately 40 hours of work to produce. Now that is just scary!

It will just sit and look pretty in my glass cabinet for a while until I decide what to do with it. I want to make another one in pretty blue colours. Watch this space.