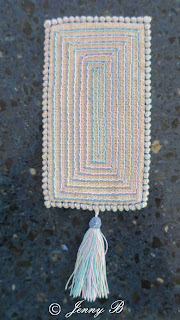 Just over a week ago I met with my creative stitching group. This year we have all been taking turns to inspire each other with a little exercise of some sort. At our last meeting our inspiration was Pueblo Stitch.

We were asked to bring a piece of fabric, two different threads that could not be divided, and a needle that would accommodate both threads at once.

I threw in a variegated crochet thread , a plain Perle 12, and some scraps of even weave linen that was left over from another project. I had no idea what we would be doing.

On arrival, we were given a page of notes on Pueblo Stitch, and told to go for it.

It was an instant decision to make a book mark, so I left enough for a hem, and just started stitching. The piece of fabric was only small and I soon came to a corner. Another decision had to be made, how to get around the corner? Once worked out, I turned the corner, worked some more, turned another corner and worked some more. This continued all the way around until I was nearly back at the start. It was here I made an instant decision to keep stitching in a square spiral in towards the center until there was no room left. I might add here that this entertained me for the day.

When I came home I added a hem and a tassel to finish it. Such a quick and fun little project in which I learnt a new stitch. 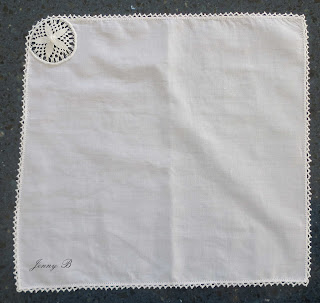 Another handkerchief to add to my collection.

This project began some time ago, how far back I am not sure, possibly a few years. I was looking for something else and found this small snap-lock bag containing thread, some tenneriffe wheels, and one of my own hand made tenneriffe pads with a circle part worked  . 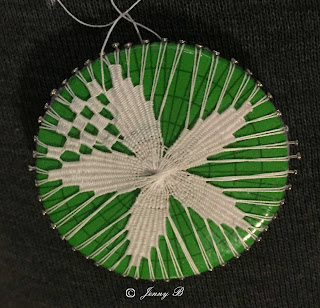 I actually found it with less work on it than it has here, as there was only one of those center petals worked. I had obviously worked out the maths, because as I continued to work the other four, the petals all fitted beautifully. I just had to make up my mind as to what to fill the spaces in with.

As I was working it, I was thinking "now what am I going to do with it?" I played with the idea of making another five and working them into a doily. Mmmmmm........... that would require too much extra work. I had two other suggestions, one was to put it on a facinator, one of those  hair accessories that are worn to the races. Considering I have never been to the races, and never likely to go, I ruled that idea out. The second suggestion was to put it in a ring and hang it as a Christmas decoration. This idea worked for me, but at this stage I had already decided and half put it into the corner of a handkerchief. 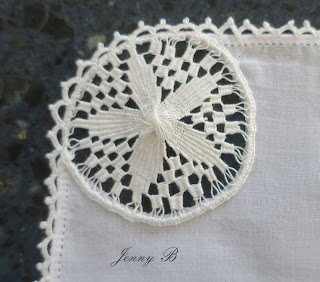 As I mounted the circle into the corner, I realised that I would have to put an edge all the way around to totally finish it. I had just finished doing buttonhole loops with bullion picots on my book cover, so  I worked the same finish around this handkerchief.

So this is number four UFO finished for the year. There are a few more yet that I want to complete, so watch this space to see which one is next. 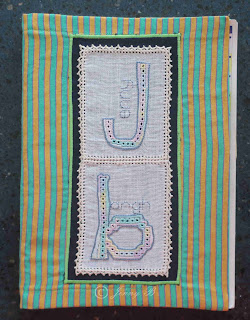 It didn't start out as a book cover, it started as a project towards an Embroiderer's Guild fund raising effort some years ago. Half done, these letters got packed away for some reason, and didn't see the light of day again until earlier this year. I found them while I was looking for something else.

They were part done, and still packaged with all the threads I was using at the time. So I finished off the embroidery, then wondered what to do with them now. The only thing I could think of was to applique them onto a book cover.

The letters were stitched onto even weave linen, so I thought it might be nice to hem them first before appliqueing. Rather than machine stitching, I could then hand stitch them to a background which could them be appliqued to the cover. In hindsight, this was a fabulous idea as they can be easily removed and used for something else if need be.

The hem I used is a pulled thread hem, which gives a little picot. The letters were two separate pieces, and this hem gave me little loops at the side to join the pieces together. Once they were joined, I had this idea to do a needle lace edge around the outside. The edge just made it.

When finished, I hand stitched the piece to a scrap of navy fabric, which then got appliqued to the striped fabric, and turned into a book cover. The book cover was made to fit a spiral backed note book which I use for my Stitchers Plus group, and can be removed to adorn another when the current one is full.

So, another UFO done. I wonder which one is next to be finished? 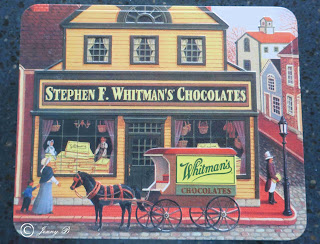 Another tin in my collection today, this one is number nineteen.

I found this tin while cleaning  out a cupboard a few years back. The cupboard is an old china cupboard that belonged to my parents, and dates back to the 1950's. I remember it in the kitchen as child, being full of every day food stuff like salt, pepper, jam, honey, sugar, cereal etc. Our every day cutlery and table linen was housed in the drawers, and every day plates cups and glasses were behind the glass of the top section. The cupboard is mine now, and houses all kinds of textile goodies including old knitting and crochet patterns. These patterns were what I was going through when I found the tin.

I am not sure where the tin came from, it was probably a gift from someone. I've done the Google search and found similar ones for sale from a few dollars up to $30. There is lots of information on the bottom of the tin including nutritional information and a use by date of August '13. Hmmm.......  that's fairly recent, and I know I didn't buy it.

The tin is rectangular in shape and only about 4cm in height, so it's another perfect stitching tin. It's just tall enough to hold a ball of Perle thread, along with a needle case, a pair of embroidery scissors and a piece of even weave linen. What more could I want for simple work storage?