Round Robins - The Good & the Bad 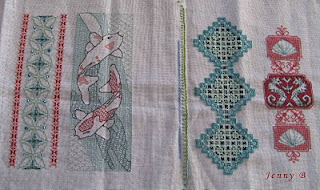 Way back in late 2006 I signed up for a Counted thread round robin. In case no-one has noticed, counted thread work in it's many forms is one of my most favourite needlework types to do. At the time I was still doing a course which was taking all my time, so the group waited until the new year. That was the beginning of 2007, and there were 9 of us participating from all over the globe.

Today in the mail my sampler has finally arrived home, with only 5 people stitching on it including myself. The stitching is exquisite, and the introduction of the red colours are just amazing. They have made the sampler pop.

The stunning band on the left has been stitched by Norma, the gorgeous blackwork fish are by Mandy, and the fabulous seahorse & shells are by Margaret. Thank you so much girls for such beautiful & inspiring stitching. The hardanger panel is mine.

I have participated in RR's & swaps before & have learnt that you never know what you will end up with, so I decided right at the beginning that this was going to be made into a carry bag, that's why all the bands are going vertical. I would mount it to a backing, add some other fabric top & bottom, some handles & some lining, & I would have a usable article. Well, that was the plan, and hopefully it will still be the plan.

However, did anyone notice the two fine rows of blue & green? The lady who did these had so much trouble that she gave up , but it has left me with a problem. 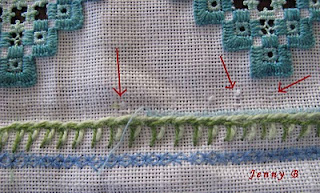 With all the unpicking that went on, there are now three broken threads that I have to deal with. I have known about them for some time & said I would deal with it when the sampler came home. All the while I thought I would cut the fabric & add some faggotting, the type that joins two pieces of fabric together together. But I am faily certain I need to add a hem to do that, & the broken threads are way too close to my hardanger band.

I have thought about removing the offending broken threads & re-weaving others back in, but I need a place to start & finish. I think I can just cut them back to the hardanger buttonhole, then start a new one from under the buttonhole stitches, weave it in, & finish where? I can't take it all the way to the other end as there is such beautiful stitching in the path.

Anther idea I had is to scatter eyelets everywhere, but in reality I don't think they suit what I have.

A fourth thought was to cut each band apart and applique it seperately onto a backing fabric. Personally I don't think this would work either as there is very little room between my hardanger band & the damaged threads.

So I am appealing to all the stitchers out there as to how I can fix my problem. At this point in time it looks like it will be a case of removing the two lines of stitching, & designing a new band to allow for somewhere to end the old damaged threads & start a new one.

Any one got any other ideas? Feel free to add comments.
at 3:23 pm 5 comments: Links to this post 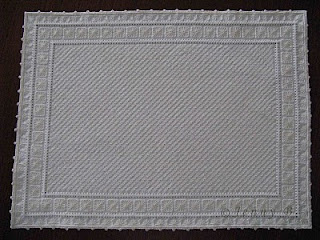 At long last I can show my table mat, finally finished. It began as something small to take away on holidays last year and grew and changed lots. At first I decided on the border, then the hem. I wanted to do another type of picot hem but didn't have enough fabric so settled on a buttonholed hem. Then when everything was finished it looked to plain so I added the bullion picots. This is the first time I have ever added them to a piece of work and I think they just finished it off nicely. This was also the piece that was supposed to feature some filet work in the center, but instead has a considerable number of eyelets. 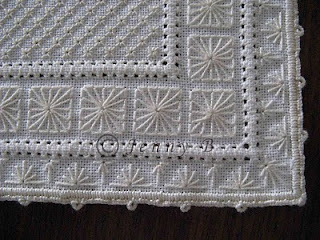 Just a closer look at the corner.
at 3:16 pm 4 comments: Links to this post 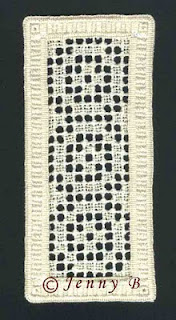 This is the second sample of filet that I worked on the side of my table mat. I showed you the first sample here. This one had a different drawn count than the first one, so leaving slightly larger holes. I've also worked a linen stitch into this one in a pattern that I adapted from Pauline Knight's book "The Technique of Filet Lace". There were no instructions of how to work it, I had to work that out for my self, and it certainly got my brain working!

In retrospect, the linen stitch would probably sit better if I had worked it on smaller holes, but that after all is what samples are for. Something to put in my notes for future reference, and in the meantime I have another bookmark to use.
at 2:25 pm 2 comments: Links to this post

When I had the idea of working some filet on the inside of my table mat, I first played with some samples along the side of my piece of fabric. The above book mark is one of those samples & I deliberately made it bookmark size so that it could be useful.

This one is worked by first creating a mesh, withdrawing threads in two directions, then whipping over them to make them strong. As I wanted a special hem finish around the edge, I very laboriously wove all the ends back in to give solid fabric again along the edge. I then worked the filling stitch & finally the hem. Just for the moment I can't place my hand on the reference I used for the filling stitch, but there is one very similar in Moyra McNeil's book "Drawn Thread Embroidery".