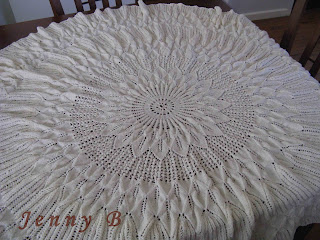 Behold, my greatest knitting achievement! Made as a gift, now given, and can now be shown off!

Back in October 2012, I received a phone call from a family member telling me that a new little person was arriving in May of this year. Wow! Excellent news! Of course, being the textile person that I am, my mind instantly started ticking over as to what I could make. But I needed inspiration, and  asked the new Mum-To-Be what she would like. "Mmmmm..........anything."  What colour? "Mmmmm...........whatever you feel." Well, that left me an open book, but I still needed inspiration. At the time I was packing to go on holidays, leaving the next day, and I had no time to think.

Thinking time came the next day in the car, I was passenger so I could let my mind wander. I could make a daisy wheel shawl, the ones that my Mum made for all the little babies of my generation. Maybe not, little fingers used to get caught easily. A patchwork quilt? I had made one of those for another family member some years ago, and then I remembered that another prominent family member on the other side also did those. I could look through some books, but they were all at home and I was in the car, not returning back for another two weeks! Decisions, decisions!

Then I remembered that the little town we were going to had a fabulous patchwork shop, and a lovely haberdashery shop with stunning embroidery threads and knitting yarns. Mmm....... I would just have to pay them both a visit to get some inspiration. Just inspiration mind you! Ha ha....... we all know what it is like when we get into shops like that! I have been in both these shops on many occasions and have never walked out empty handed!

We traveled on a Saturday, arriving too late in the afternoon to go looking, the lovely shops were closed by the time we arrived. Bugger, I just had to wait until Monday.

So on Monday morning my first port of call was the patchwork shop. I wasn't thinking patchwork quilt, I was thinking patterns, you never knew what they had. But there wasn't anything that said "baby", so then I just had to look at fabrics, how could I not? Remember I still had no idea what I was going to do! Still nothing that jumped out and said "baby", so then I stated looking at colours and picked up a few FQ's that together said "baby". I think I walked out of that shop with enough fabric to make a cot quilt, and that together would make something nice for a new little person. At this time though I still didn't know what that something was.

My next port of call was to the haberdashery shop. It's one of these shops that may not look all that inviting from the outside, but once you step inside and start really looking, there are some amazing treasures to be found. Right by the front door was the wooden stand with all the knitting and crochet patterns which  took me a long while to get past . I found two books with knitted baby shawl patterns, mmm......................... which one. They both had some beautiful patterns inside. After much deliberation, thinking of my ability, and the tastes of the Mother-To-Be, I made a decision, then moved on to yarn and needles. I had needles at home of course, but they were at home and I was elsewhere, and I wanted to start knitting NOW.

So here I was on holidays with enough fabric to make a quilt, and enough yarn to make a shawl. I might add here that I also had other stitching to do, but the shawl took over. The pattern is from the Shepherd Baby Shawls Collection 1, knitted in Shepherd Baby Wool Merino 3 ply. It begins on a set of four needles, then graduates to circular needles. I might add here that in the book the patterns are given a "sheep" rating which I didn't notice until a few days after I bought it. This pattern is given a "4 sheep" rating, in other words the hardest in the book! Well, that didn't surprise me, I usually go for the difficult and most challenging!

The pattern certainly was challenging! I think I un-pulled the start about 10 times before I got it right. I was nearly to the point of giving up and making one of the more easier patterns in the book. But I like a challenge, and never like something getting the better of me. After the rocky start, it was plain sailing for quite a while, until I needed a longer circular needle. I had checked in the haberdashery shop before we came home, they only had an 80cm one, I wanted 100cm. Then I checked my usual haunts at home, still nothing larger than 80cm! This shawl was pictured as a finished item in the book so there must be longer circular needles somewhere! I just had to find them.So then I started hunting on-line. I could find kits & packages that had them included, but they were $$$$$ and I wouldn't use the other items included. I finally rang Morris and Sons, where the girls were extremely helpful, and I had my 100cm circular needle within days. The shawl could grow a bit further, that is until I had to do another row of increases, and the 100cm needle needed to be longer! So another call to Morris and Sons who helped me out of a jam once again.

The needles were Knit Pro brand, which I would highly recommend. They are beautiful to knit with, and come in separate tips and cables which screw together. There are all sizes in the tips, and varying lengths in the cables, and there are also little connectors that connect two or more cables together to make one really long one. With this shawl I ended up with a 120cm, 100cm, and an 80cm cable, and at some point had the 100cm and 120cm cable joined together to take the over 2,000 stitches that were required!

So behold, my greatest knitted creation! A challenge and a half! Would I do another one? Maybe. I am thinking some alterations to this one to make something more adult-ish.

And what of the fabric I bought? Well some of that went into this quilt, and some I still have, with plans of making something else. So watch this space for more baby related goodies, and adult versions of the shawl above.
at 7:29 am 3 comments: Links to this post