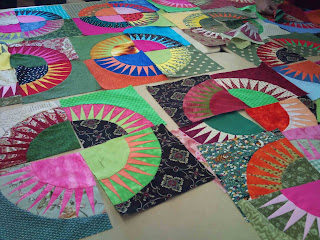 What a great morning I  had yesterday. It was the first meeting of our new Australian Sewing Guild group, the Georges Hall Sew'n'Sews. We were all a little anxious, being a new group, a new venue, wondering how it would all go and what we were going to do. In hindsight we shouldn't have worried at all, it was just a fabulous meeting. We had thirteen in attendace, 1 appology, and one person walk in off the street to see what we were doing. By my maths, that makes 15 people, and they are all talking about comming back. Yippee!

The first adventure was unlocking the door and getting it to stay that way. In the end we just clipped the door back with the hook provided. It was only a door into an entry, and as there was another door into our hall space, the cool weather oustide wasn't a problem, especially when we found the airconditioner button. Once that was pushed it wasn't long before we were all warm and cosy.

The second adventure was the lights. So many light switches! They were all labelled, it was just a case of finding the ones that we required. Easy to find for the next time.

Then came the tables and chairs, and I am pleased to note that everybody helped. At first we only got out three tables, thinking it would be plenty for the people we knew that were comming, but it wasn't long before we were putting up more to accomodate all the newbies.

Now that was just the setting up, the real guts of the meeting was yet to come. We talked about what people wanted to do, what they wanted to get out of the group, and came to decisions as to how the next few meetings would go down. There was show and tell aplenty, including the quilt blocks at the top by Margaret. So bright and fabulous, all made from scraps. 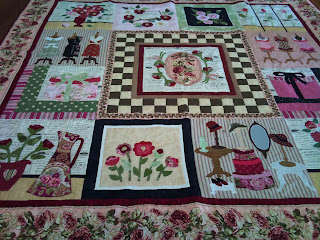 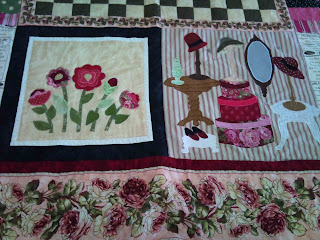 This quilt was also by Margaret, full of beautiful applique. 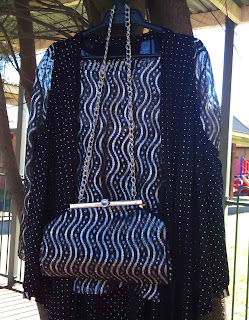 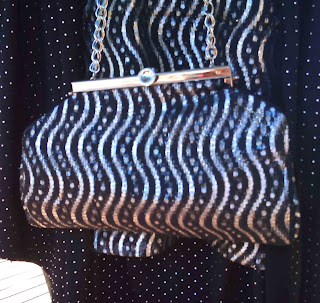 Jenny J was off to a special function and had made this stunning outfit to wear, including the matching bag. Somthing that would cost $$$$$ in any little boutique. 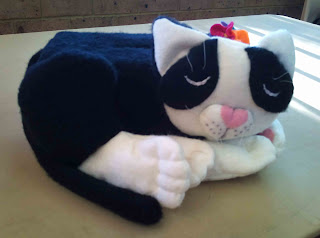 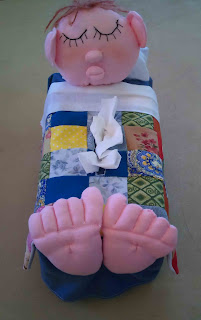 There were also these fun tissue box covers by Jenny J that will be for sale, great for that special place or person.

Then there were the conversations, so manyof them I couldn't keep up with them all. There were conversations about quilts, quilt blocks, quilting and how to get quilting designs onto fabric. Paper pieceing, mitered corners in binds, making personalised dress forms, how to choose  threads, pants fittings, taking patterns from a garment, how to read commercial pattern instructions, sewing machines, sewing machine mechanics, scissor sharpening............and that's just what I was a part of. There were conversations happening all morning, everyone was chatting and it was all about sewing. All the new people were made welcome and were included in on conversations. Just fabulous! In the end we were havng to push people out the doors because our time was up. Now that's what I call a sewing meeting. May there be many more to come.

Acknowledgements:-
Photography - Helen N
at 7:00 am 5 comments: Links to this post 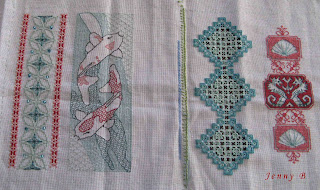 Some of you might remember the counted thread band sampler round robin that I entered into way back in late 2006. Well, this was mine as it was returned to me. You can read my thoughts about this in this post.

I have a motto that "everthing is fixable" (well almost everthing) and I have been deliberating on this one for a while. Now has come the time to share how I fixed my sampler. 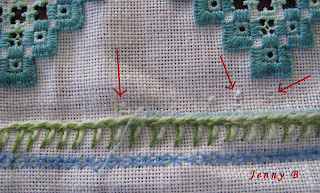 Step 1. Identify the problem. In this case it was 4 broken threads in the fabric. 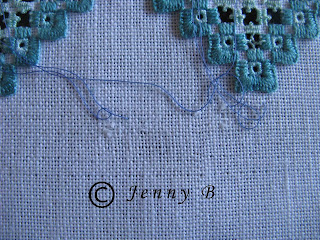 Step 2. Mark with thread where the broken threads are so they would be easilly found when required.

Step 3. Carefully remove the stitching. Appologies to the lady that did the stitching but it had to come out so I could get to those broken threads.I had to use my magnifier and  good light so I didn't do any more damage. The unpicking left a few holes from the stitching, but these will come out later either just with handling or by easing the threads back in place with a needle. 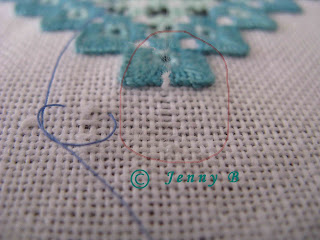 Step 4. Carefully un-weave (is there such a word?) the broken thread back to an anchor point. In this case the anchor point is the buttonhole stitch of the hardanger band. Care muxt be taken not to break the thread as it is removed as we need as much length  as possible. In this case I had only a few mm. 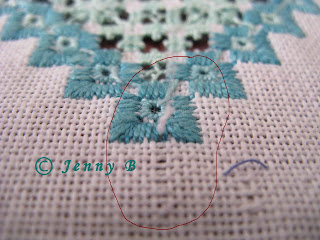 Step 5. Turn the work to the wrong side . 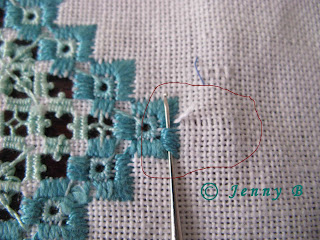 Step 6. Finish the end under some anchoring stitches. In this case the end was far too short to thread into a needle so I pulled it under with  a fine crochet hook. Ideally I would have liked to have done some double stitching in under that buttonhole stitching but the end was far to short for that. I'll settle with it just tucked underneath. 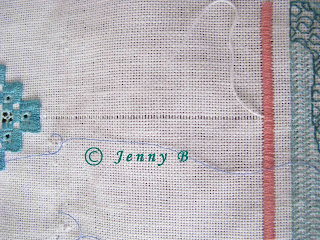 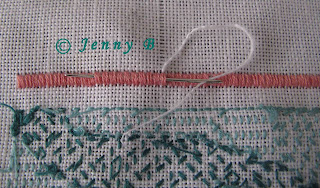 Step 8. This time it was easy to to put that fabric thread into a needle & anchor it under the satin stitching. 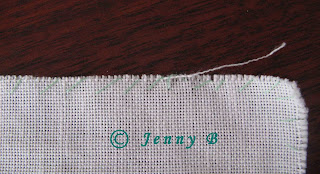 Step 9.To replace that broken thread that I had removed, I took a thread from the side of the fabric. I'ts the same as what I just took out, only in one length, not broken. 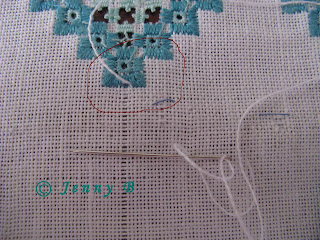 Step 10. After threading that side thread into a needle, I anchored the end in underneath the buttonhole stitching. 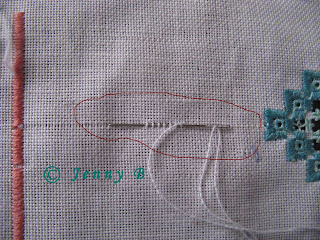 Step 11. Then I very carefully wove it into the space that was vacated by the broken thread. Care had to be taken to go under and over in the right places to keep the weave correct. 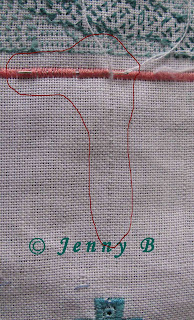 Step 12. There was more anchoring to do at the other end once I had woven that thread back in. 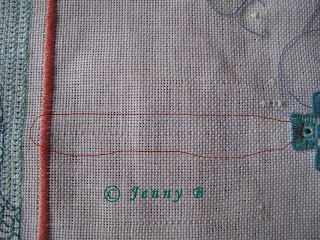 This is that one broken thread all fixed. The weave is correct but my tension isn't the same as the original, it shows as a pulled thread. Hopefully over time with some handling, the fabric threads will work themselves around and it will be less noticeable. Having some stitching over the top will certainly help, but that is for another day. It is certainly better than no holes. In the process of fixing this one, I found another two, that makes six broken threads in all. Now to fix the other five (and any more that I find) and to think about what will go in the space.

At this point I would like to add that this fix is not suitable fo all mistakes. Each error has to be assessed in it's own surroundings to work out which is the best and least noticable way to. 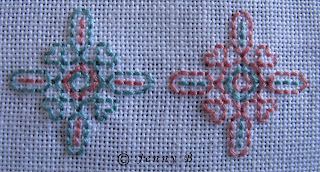 I've been working slowly on my band sampler & have added another band. This is the sampler that was part of a round robin over the last 5 years, & came home with a problem. 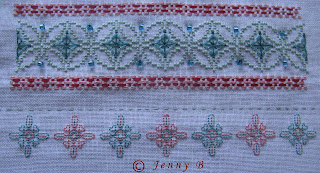 The band I added is another blackwork one, one that I designed myself to go on another project. This time I only used part of the design, & played with alternating colours. The motifs have been placed in a row to form the band. 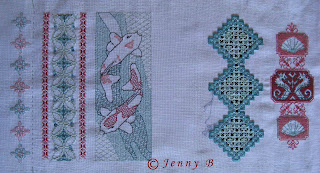 I think it has helped to bring the sampler together a little more & I am loving the overall look that is happening. You may have noticed that I have also removed some stitching ready to fix the delema I was left with when the sampler come home from it's world travels. The delema I was left with can be read about here. Now all that remains is to fix the broken threads & work out what I will place beside Mandy's fish. I do have a plan of how to fix it so watch this space & I will teach you how.
at 11:20 am 1 comment: Links to this post