I've finished another little bobbin lace Christmas decoration. It's from the same series as the little bell I made back earlier in the year. This is also  made in  DMC Cordonnet Special No 50 thread.

When I made my bell, I was happy with the thread choice, but this time around it's a different story. I like it for the cloth stitch, but not for the plaits. The plaits are a little but cumbersome. Maybe next time I will change the inside decoration to something else. Time will tell.

In the meantime, I have started number three in the series of six. So watch this space to see what it is. It may be a while, there are quite a few other projects happening that are priority.
at 12:21 pm No comments: Links to this post 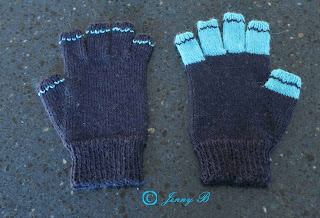 Meet my new pair of crazy gloves. They are finger-tip-less, ( is there such a word?) and very warm. I believe in the real world they are called finger-less gloves, but I made them so they only just expose my finger tips.

A few years back I never wanted, needed, or thought I would even like these type of gloves. I couldn't see the point. Why expose your finger tips to the cold? But then my hands started getting dry from the winter winds as I pegged washing on the line, and no amount of hand cream would help. A male member of the family suggested I use rubber gloves, but I found these cumbersome . Then I had a brilliant idea to make a pair to fit my hands, so I did, and loved them.

Then about two weeks ago they decided to play hide and seek with me. I had used them in the morning to peg out the washing, then wore a pair of full fingered ones on my walk to the shops later that morning. The next morning I went looking for my finger-less ones again  to hang washing out , and they were no where to be found. In winter, they normally live in my dressing gown pocket, jacket pocket, coat pocket, pants pocket,  on the kitchen bench, on the dressing table or sometimes on the coffee table in the lounge room, but they were in none of these places. I started to think what I had done between hanging out washing and walking to the shops. In general, I have turned the house upside down looking for them, and yes, they are still hiding.

Another male member of my family suggested I cut the tips out of another pair that I already had. Mmmmm............. yes, well......... The male members of my family have no idea of fabric construction, and besides, most of the gloves I own are my own hand knitted ones. There was no way I was doing this to my handiwork. I could, however, do it to an old stained pair of white cotton gloves, so I did. There was a little bit of warmth, they did stop the wind, and they kept me out of trouble until I could make another pair.

I had only one 50gm ball of navy 4 ply yarn and thought this would be enough. Not so. It only got me one glove, and the hand section of the second one. Now what to do? I at least needed some section of the fingers on this second one. So I pulled out a ball of sky blue 4 ply that I had and added the fingers to complete the glove. Then I added some stitching to tie them together as a pair. Mmmmm........ interesting to say the least.

At least they are warm, they will stop the wind, and I am sure that now I have another pair the original pair will come out of hiding. Lets hope they do, because then I will have two pair
at 12:25 pm No comments: Links to this post