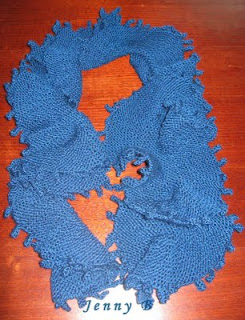 My blue scarf is finished, just in time as the weather is wintry today. Cold, showery & windy. I really wanted it a little longer, but when I went back to buy another ball of the same yarn there was none left. I guess it doesn't need to be super long as the ruffles are enough to come up my neck & keep it warm. No need to wrap around, it would be too thick for that, and it's long enough to tuck into a coat neckline. 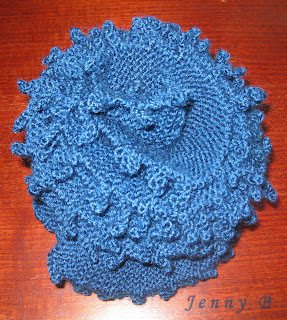 It rolls into a little ball for storing and I just love the picots along the edge, super easy. This one is made in a cheap acrylic yarn, not something I am particularly fond of, but it is warm & will serve a purpose.
at 12:32 pm 2 comments: 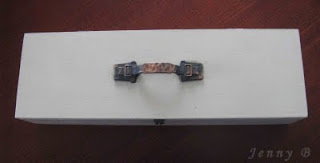 It is amazing what I find when I am not looking. Yesterday I was putting some thread away in a cupboard & spotted this box. I had forgotten I had it, I thought someone else had it. It is a box made for my Mother by a family member, especially for her to keep her knitting needles in. I have had it since she passed away & have not looked inside it since. So of course I had to open it.

Inside I found the remainder of my Mother's collection of knitting needles, and the box was quite full. There were a great variety of sizes, both plastic & metal. Some of the metal ones sadly had gone the same as mine, coatings coming off. They have since been cleaned & sorted, damaged & odd ones tossed. 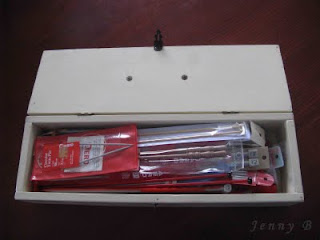 The box now looks like this, and is full again, complete with a combination of my own, my Mother's, & possibly my Grandmother's knitting needles.

After hearing the story of the lady in the store last week & her experience with coatings coming off her needles, I have started to ask my other textile aquaintences. Most have never heard of it before, but one lady (J***) in my stitching group yesterday had also had the same trouble. Another lady said that it was from lack of use. Mmmmmm................... posibility. I have been knitting on & off over the years, but over the last 15 years it has been with large size needles, not the finer ones. What is interesting to note though is the needles that have remained in their packets are still OK, while the ones left out of their packets are not. Even the ones of my Mum's that I found yesterday ( & certainly would not have been used in the last twenty odd years) are OK if they were in their packets. 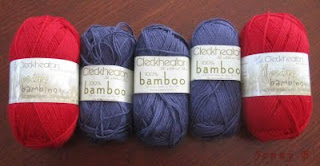 I had reason today to go back to my local store for more knitting yarn. While I was there I got chatting with another customer & low & behold all the coating on her metal knitting needles was coming off too. You may remember I mentioned it in my last post. I wonder why that is? We chatted about storage, which I thought may have been my problem, but as this lady used a different storage method to me, this was not the case. Her thoughts were towards humidity. Personally, I think it must be quality.

As to the yarn I purchased, the red is a 100% pure new wool, while the blue is a bamboo yarn. I haven't knitted with bamboo before so this will be interesting. I'll keep you informed. Both yarns are 4 ply for something special. Watch this space!
at 12:12 pm 3 comments:

I've been hit by the knitting bug.

I was given some lovely textured yarn a few months back as a gift & it has been sitting there waiting patiently for me to decide what to do with it. I knew I had to add something to it, but first I had to decide what to make and a scarf was the obvious choice. So when my long time friend M... came for a visit from the country, we headed off into the city to Morris & Sons to see what we could find. Well of course there was plenty, & I came home with some 8 ply in two colours & a pattern for a ruffled scarf.

That night I dug out my knitting needles & as the 8 ply required a different size needle to my textured yarn, I chose a needle size halfway between the two. Nothing like a little creative knitting!

After a little play, I decided to go down a size, but found that my lovely needles that I'd had for many years had started to deteriorate. All the coating was starting to come off & the yarn was catching. Bugger! Not to worry, I had another stash that had belonged to my Mum & I found a pair of appropriate size in plastic which got me out of trouble.

So last Saturday I visited my local Lincraft store to stock up on my knitting needle supply. It had been years since I had bought any, I had a great range of sizes. So much variety! Which length to choose? Metal, plastic or bamboo? I am used to knitting with metal needles so kept with those in a long length. Then I spied these lovely wooden ones with turned ends which I can't wait to try. 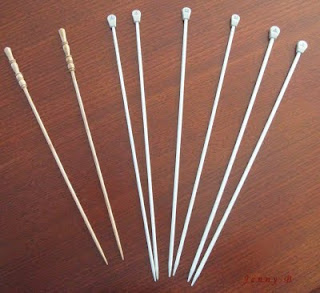 So what am I knitting? My ruffled scarf of course! I started off with the pattern I bought, then found a similar one elsewhere but with great variations, so I am trying one variation in a cheap yarn to see if I like it or not. It has picots along the edge, something I have not done before. I hadn't knitted ruffles like this before either but they are relatively easy. 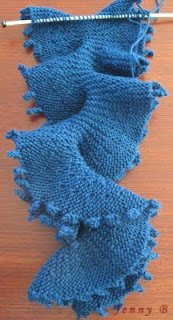 Once I finish this one, then I will decide how I can incorporate my lovely textured multi coloured yarn with my plain coloured wool. The weather has turned decidedly chilly with snow falling last week not to far away so scarves will come in very handy.
at 3:13 pm 4 comments: 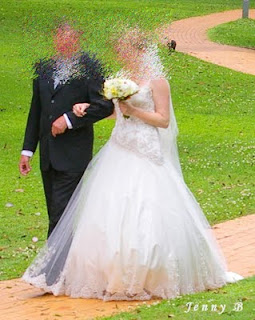 With all the attention on the Royal Wedding this past week, the talk for the last few days has been about "The Dress", who designed it, what it was made from, etc etc. As a dressmaker, embroiderer, & lace-maker, I want to be able to touch, feel, turn it inside out, & really look at how it was made. ( especially the bustle detail) . I want to talk with the people who were involved in its making to find out every little detail. Television footage, internet pics ( even with magnifiers) & even press releases from the Royal School of Needlework are not enough to satisfy my hunger. This video makes me even more hungry.

We all know by now that "The Dress" was made of lace, & motifs were hand stitched to the dress by skilled embroiderers. So now I would like to show you all a wedding dress that I made back in 2008 using the same process. The bride wanted a wide lace border around the bottom of her dress, but fabrics that included this were out of the price range. So I created the border for her. 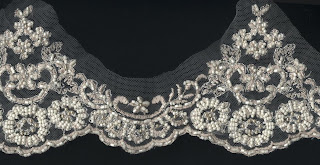 I cut the border from the purchased lace fabric, then very carefully trimmed all the excess tulle away. This border was then hand stitched every few mm onto another piece of tulle that became the over skirt of her dress. 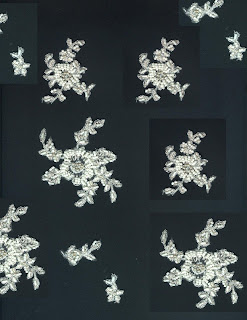 The lace fabric had different sized motifs scattered all over it, so from the scraps left from cutting the bodice, I very carefully cut lots of little lace motifs and appliquéd them onto the tulle above the border into a different pattern. 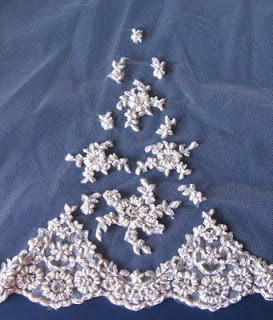 It was 7.5 meters around the hem of this layer, so with hand stitching the border both top & bottom, and hundreds of little motifs being appliquéd in place, I think you can all imagine the work involved. I may not have had the Royal School of Needlework to help but I did have help. The bride, her bridesmaids, and my dear friend R.... helped to cut out motifs & to appliqué them in place. My friend & I are both members of The Embroiderers Guild here in Sydney.

When the lace was purchased for this dress, we found out that we could have lace especially made into any design we wanted. It was a little late for that, but still interesting to know, though the extra cost involved still may not have been in the budget

This dress may not have had the amount of lace or work that "The Dress" had, but it sure had a lot of love with every stitch. I think it is one of my greatest creations.