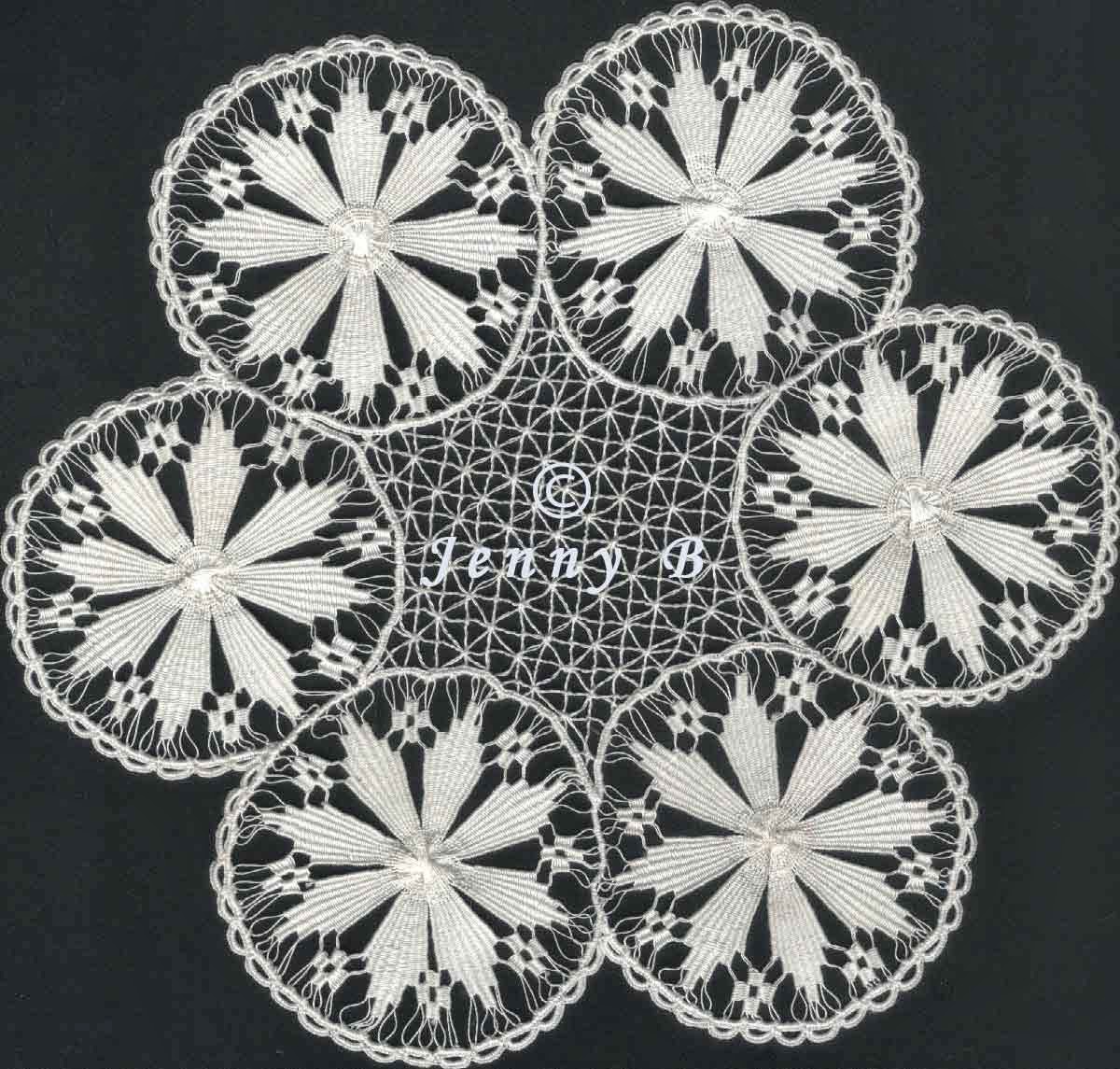 Behold! My latest finish! A Teneriffe lace doiley just for me!

This little doily was started because I wanted something to take to a lace meeting one day. I had already done one similar a few years back, but it had been made especially for a friend and had been given away. At the time it was the first time I had joined the circular motifs into a bigger piece, and I promised myself I would do another one for me.

So here it is, finished and complete! Made using DMC Cordonnet Special thread No 80, I have used the same sized wheel & base pattern as the previous one, just changing the weaving pattern within the wheels themselves. I have also worked scallops in detached buttonhole stitch around the edge to finish it off, where the last one I used a crocheted edge.

Now I want to go bigger, something oval I think, just to be different. Watch this space!
at 2:12 pm No comments: Links to this post

Knitting Up Some Extra Warmth 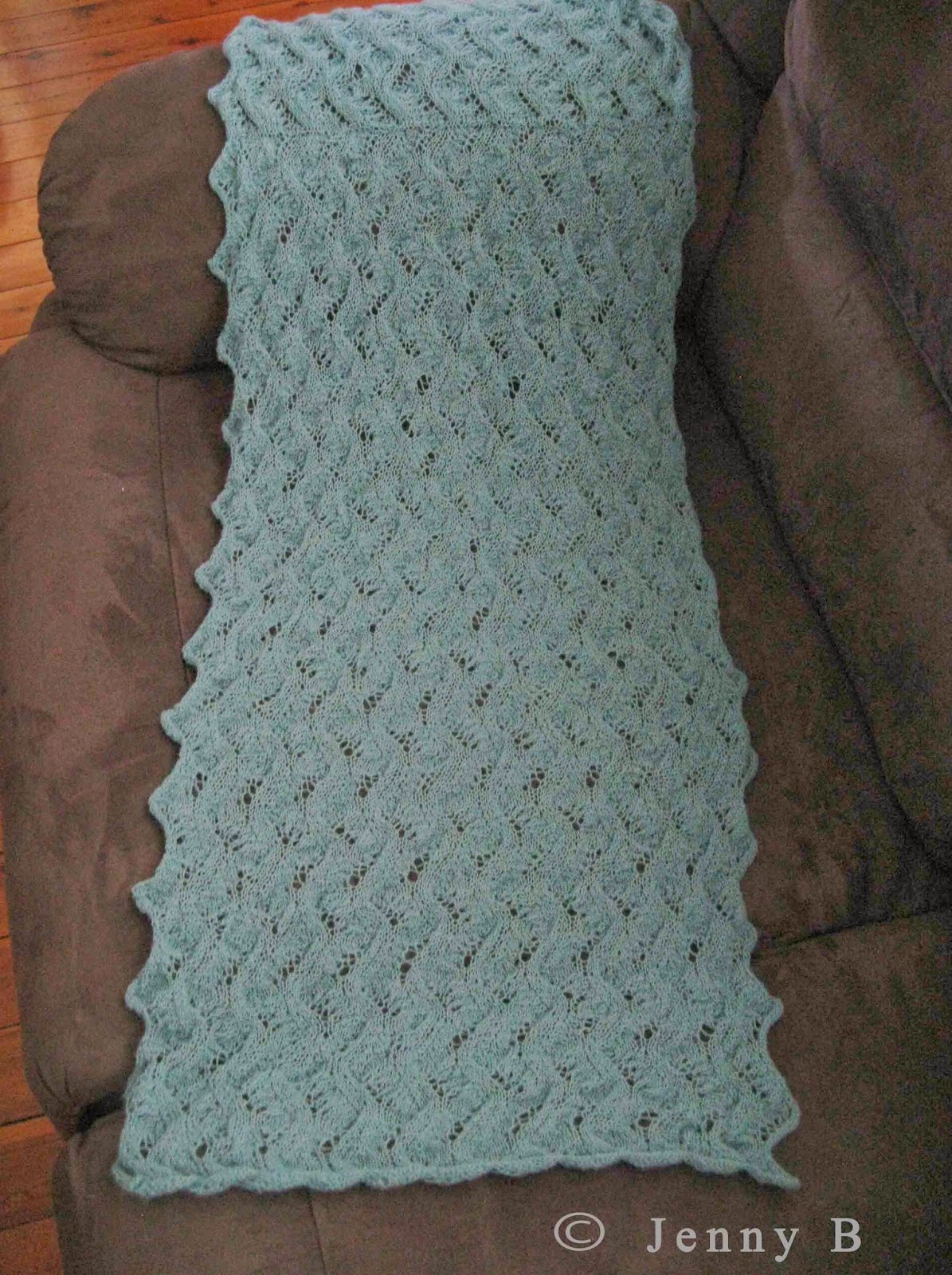 The knitting bug has had me caught over the last few months, in between the crazy patchwork embellishment, a new piece of tenneriffe lace, my pulled and drawn sampler, and  a project for Stitchers Plus.

First up is my new wrap. This began in October last year when I walked into a little habby shop while on holidays. The buisiness was for sale, and  everything was marked down. I walked out with a lovely hank of "Centolavaggi", a 100%, merino wool,  lace weight yarn from Italy. I had no idea what I would do with it, just a scarf of some kind. Also on the same day, I visited a tiny little, church run, second - hand shop, & walked out with a baby knitting book ( minus the cover) for all of 20c. Inside was a pattern for a circular baby shawl in feather & fan. My theory was that if I used larger needles, I could do 1/2 of the baby shawl, and it would come out large enough to wrap around me. Mmmm......... famous last words. it wasn't working up as I'd hoped, so I un-pulled it and found another pattern.

In the end I used the free "Meandering Vines Shawl" to be found on Ravelry, though I tweaked  it a bit to suit my purpose. It is knitted in two halves, which are then grafted together, something I have only done once before and that was nearly 35 years ago. So consequently there are no close-up pics of my grafting! Still, my wrap is finished for when the cooler weather finally arrives. 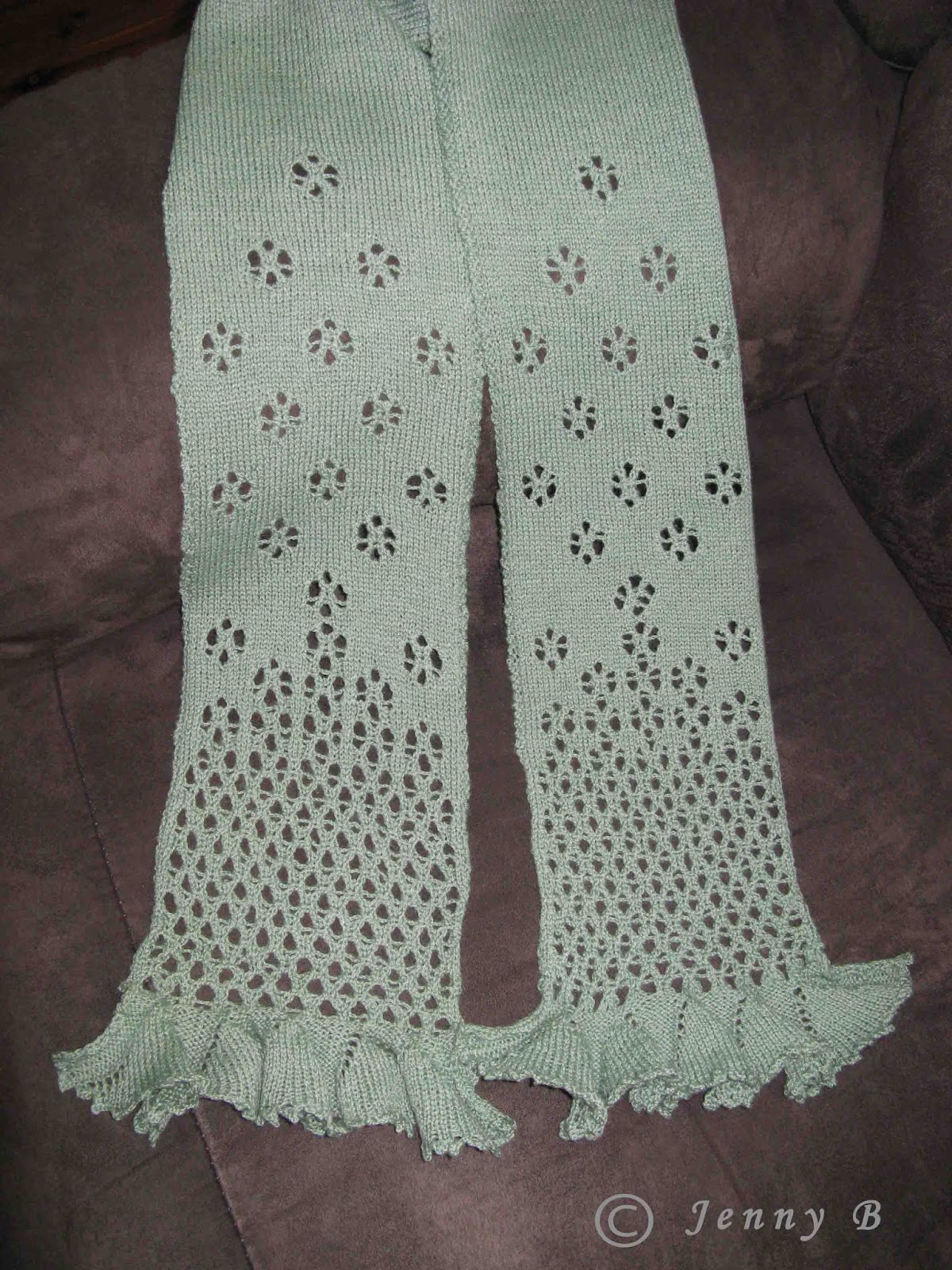 My second project is this lovely scarf. It was born purely for the need of something to do while on a flying trip up north. My wrap was finished, all except the grafting, so I needed something else, something that I could see easily without dragging magnifiers around or needing excellent light. I found three balls of Payton's "Embrace", a 2 ply yarn of 90% merino wool - 10% silk, in my stash. So I quickly searched my patterns and found this, the "Flit 'n' Float" scarf, by Birdy Evans, also available for  free on Ravelry. I had used one of the charts of this patten to make this scarf a few years back, now I wanted to do the whole thing.

The pattern began with  a provisional cast on, something I had not done before. This method creates 'live' stitches which are placed on another yarn, then picked up later to knit the remainder of the scarf. The flounce is knitted first, from the base of the scarf to outside edge of the flounce. The stitches are cast off, then picked up again from the provisional casting on and then the  remainder of the scarf is worked. It was interesting doing this and really not that hard.

I am very happy with this scarf, it is warm and light, & long enough to wrap around my neck twice. I also love the beautiful feel of the yarn. Now all I have to do is think about what to do with the remainder, I still have a ball and a half left. I am thinking gloves to match, so watch this space! Think I will be warn enough this winter?
at 2:00 pm No comments: Links to this post