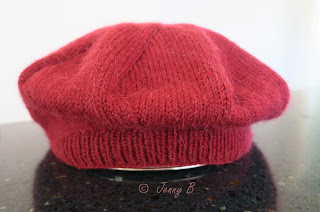 Behold, my new red hat! After knitting my brown one, I wanted more. One in every colour!

I had some crimson coloured yarn left over after knitting my cabled jumper last year. The yarn is 'Savanah" yarn, which is a 70% wool, 30% alpaca yarn from Bendigo Wollen Mills.

This time I wanted a more slouchy hat, more of a beret than the previous brown one I made. I had a sheet which gave me how to start a spiral shape for a shawl, and I figured I could do this, continue out for the diameter I needed, then decrease back to the circumference of my head. So that's exactly what I did. 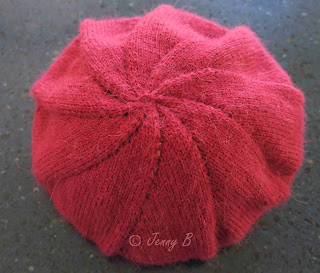 My new hat is warm, it fits me perfectly, and slouches just how I want it. Now I want one of these in every colour! I might even venture to putting a pattern in it somehow. That just might take a little figuring out how to do. Watch this space to see what I come up with!
at 12:34 pm 1 comment: Links to this post 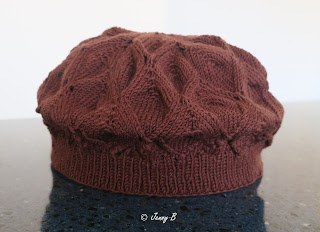 This hat was born from a discussion with my friend M---- as to what to do with left over knitting yarn. I usually make scarves, but have a box full of them, so she suggested a hat.

Tight fitting hats such as beanies never really suit me, and I have been on the lookout for beret style knitted hats for a while. There are a lot of "slouchy" hat patterns around the internet, and I figured these would be similar to a beret style, so I had a little hunt to see what I could find.

In the end it came down to what needles I had. The pattern began on double pointed needles, and I had a set of  old size 9, or finer ones for working with 4 ply. I chose to use the old size 9 ( 3.75mm) and just went for it. When it came to the band, I used my circular needles in 3.25mm.

Over all it is a little big, but at the end of the day that is OK. It still covers my ears and I am sure it will stay but on a windy day.