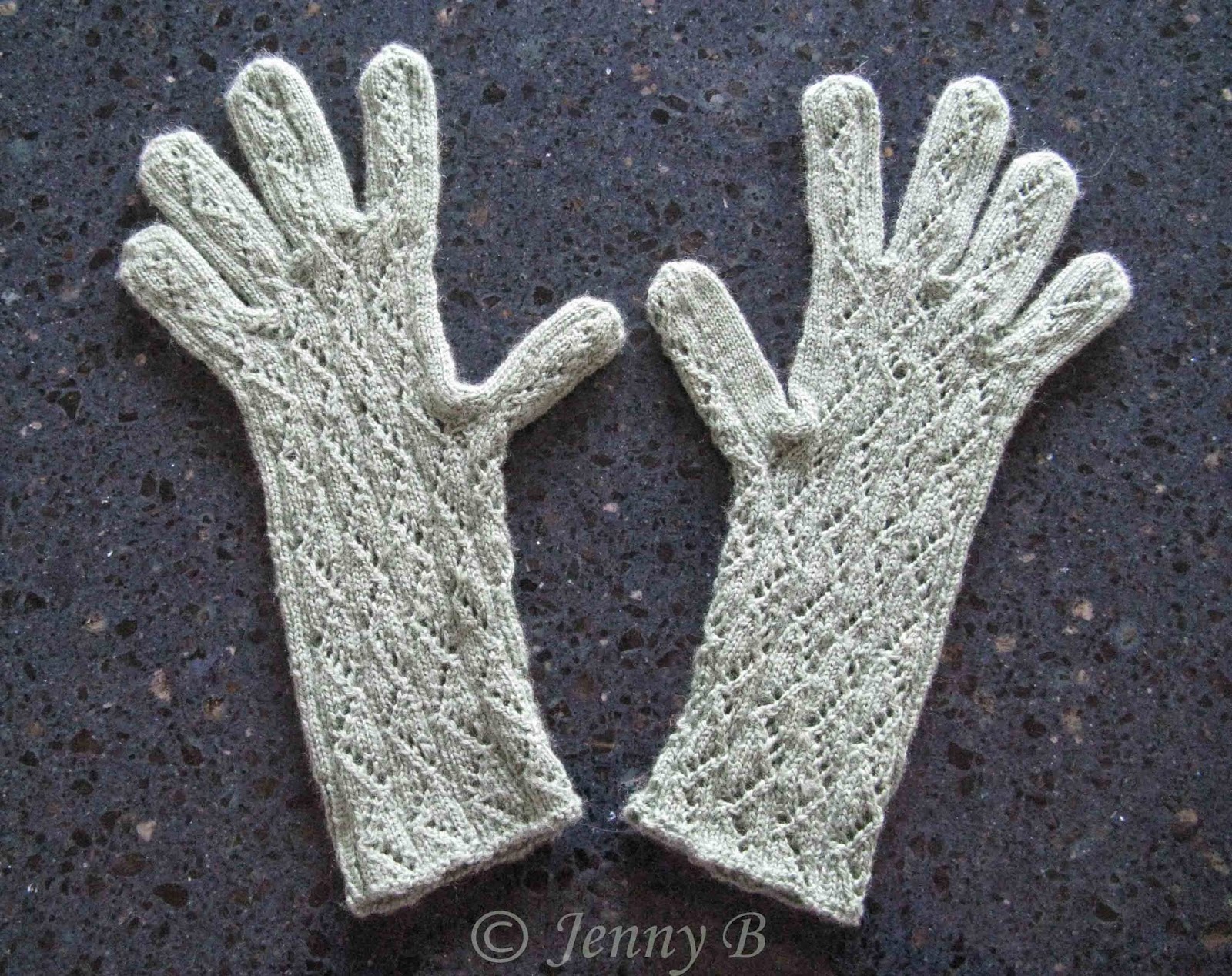 My new gloves are finally finished! This pair were born after finishing this  scarf . I had originally bought three balls of yarn,  Paytons Embrace, a 2 ply of  90% Merino , 10%  Silk. Beautiful yarn! So soft and warm. The original purchase was for a scarf, which is what I did, but I only used half of the yarn and I still had a ball and a half left. What do do with it? I could make another scarf, but how many green scarves do I need, even if they are different patterns? So then my mind went to matching gloves.

I had made gloves before, but they were in 4 ply and this was a 2 ply. So the hunt began for a pattern. I found a few old ones on the net, but they were fingerless, and I wanted my fingers warm too. I figured if the crunch came, I could have a go of adding some fingers in. It would mean some experimentation and I thought I could do it if I set my mind. Before I tackled this task though I asked some of the ladies at one of my stitching groups, one of which produced this pattern, which came from a book " A Gathering of Lace" by Meg Swansen.

I would class myself as an experienced knitter, but these gloves would have to be  the hardest thing I have done. Worked on 2mm double pointed needles, with a patterned rib thrown in for good measure, and the beginning half rib, half pattern. The pattern certainly took me for a ride, but they do fit well, look pretty, and best of all keep my hands warm.

They are finally finished, and ready for winter. I also still have just over a ball of yarn left, so what to do with that. I could knit another scarf as a gift for someone, or I could adapt the glove  pattern to make a pair that would match my scarf. Mmmmmm........................... food for thought, which way to turn? Watch this space! 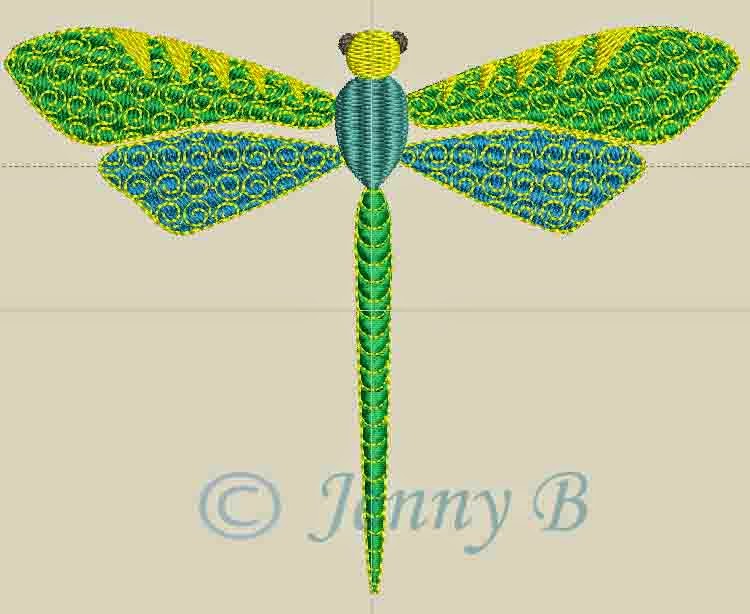 My first dragonfly I have digitized! It's also the first thing I have fully digitized in my new digitizing program, about three weeks worth of playing and learning.

It all started a few weeks back, when unbeknown to me, DH and DS2 decided to upgrade my PC to Windows 8. There was talk in the background about buying stuff, but it was computer stuff, and I wasn't really interested or taking much notice. Then one day just before Easter, DS2 started asking about my digitizing program, what it was and what version it was. Why the sudden interest? Mmmmmm........ it was not going to work on the new Windows 8 that they had ready to install on my PC! I had spent $$$$$ on this program, so it had to work! So I asked in at my local dealer, and of course the girls in there did not know, but they gave me the phone number for Bernina head office. I rang when I got home and got told that I had to talk to a particular person who was currently interstate at a quilt fair. They would pass on my details, and I was assured this person would ring me back. Come the next day, still no answer, so I rang again. I got to talk to another person who also told me that the person currently interstate was the best person to talk to. While I was on the phone to her, there was another call coming through. Guess who!

I had a great chat to this girl, who told me that an upgrade for my program to the latest version had just been released, and yes, she assured me it would work on Windows 8. There was still better news, it was on special for Mothers Day! The price was certainly good, about half the price quoted to me over 12 months previously for an upgrade to the previous version. I certainly was a happy little  vegemite! How did I get this? Ring my local dealer of course.

After many phone calls, and to cut a long story short, this upgrade was purchased, paid for, in my house and  installed on my PC by late that afternoon, without me having to leave the house! I give thanks to the girls at my local dealership (especially Anna), Bernina Australia, and  DS2 who made it all happen.

Now for the program itself. When it opened for the first time, I thought "what is this?". It looked all new. But once I sat down, read the manual, and spent some time playing, everything that I knew from my old program was still there, just in a slightly different format. There is heaps of other stuff that is new as well, stuff that I have yet to play with and learn. After playing for a little while, I thought that the only way to learn where everything was, was to actually digitize something. That's when my dragon fly was born.

Anyone who digitizes knows that the process takes some time. I wanted to get the stitch order right to eliminate too many colour changes, and avoid jump stitches that were too long. As I worked on all of this, I found all my stitch  fills, my "Cut Holes" tool, I created my own pattern fills, found the colour film, and the slow re-draw. All these things were what I was used to using, and  there is so much more!  There are contour fills now,  ( which I used on my dragonfly tail)   ripple fills, wave effects and star effects. I did use the wave effect on my dragon fly to get the ridges in his wings just where I wanted them. There is a stamping tool where I can stamp single patterns into a design just where I want them. I can also create my own stamps. There is a carving stamp ( which is different from a stamp) which I think will create sculptured fills, and yes, I can create my own. There is monogramming, stump work, morphing, and punch work, all things that are new to me. Last but not least there is a hooping canvas, where I can split a large design into numerous hoopings, allowing me to stitch it out so the sections meet back together to make one large design. This to me sounds scary, but something I have to try.

So my dragon fly is finally finished being digitized. The stitching order and colour order is correct to how I want them, and any jump stitches hopefully will be hidden under the body of the dragon fly and caught down. The next test will be to stitch him out, and that will hopefully happen in the next few days.

So what now? Playing with all the new features of course. My first play was with the monogramming tool. This is awesome! Would I put monograms on anything? Maybe, maybe not. My mind is racing to other applications, such as creating blocks for quilts minus the initials of course. Watch this space!