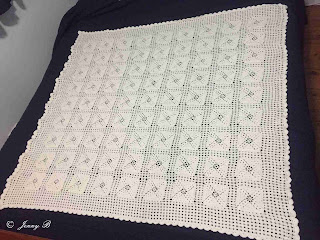 Back in August I got word that another little baby was due in the family. I had only just met the mother-to-be, so asked another member of the family about what she would like. I was concerned about making something, only to have it not looked after properly.

I decided on using wool, as I was assured that the new Mum's mother would look after it. The yarn is Bendigo Woollen Mills Luxury Frost in 3 ply.

I also decided on a pattern, a square that would be easy to take away and work on away from home. Unfortunately, the square proved too difficult at the time, and I decided on the above pattern instead. It was just crocheted squares joined together. How hard could it be? The pattern is from the Shepherd Baby Shawl Collection Book 1, and marked as a 4 sheep rating, the hardest in the book. I repeat, how hard could it be? Mmmmmmm............... the rating is there for a reason!

The pattern told me to make 64 squares, to me that is 8 x 8 . So I made 8 squares, then started to join them together. Mmmmmm...................... they did not sit even. So I un-pulled the joining row, looked at the picture, worked out the maths, and figured I needed 9 squares per row! That meant 81 squares! So I made nine squares, joined them on, worked the in-between mesh, and repeated the process.

I worked this way because I knew I was going away. My plan was I could take squares with me to do and join them together when I came home. As I worked nine squares, I would join them on, this way all would be together and I would know exactly how many squares I could work while I was away. The problem was I had all the squares done and joined together before I went! That meant I had to find something else to take, but that's another story for later.

Anyway, the shawl was finished way before baby came. It has now been wrapped and gifted. Wool is bit hot now for bub to use, but as you can see it is quite large, and will be quite handy when the weather cools down, even for some years to come. I just hope the new Mum likes it.
at 9:09 am