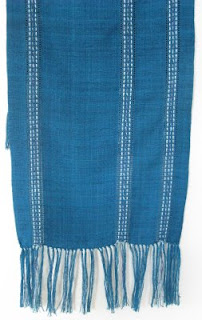 I finally finshed my wrap today. It has been waiting for me to knot the fringe & cut it even. I was hoping to have this all done by last Saturday so the girls at Stitcher's Plus could see it finished, but this was not to be. They will just have to make do with the pics like everyone else.
Below is a closer view, and as you can see I didn't do anything too fancy. I felt the coral knots were a too heavy in my experiments, so I just kept to darning. It is after all to wear to a wedding, so I wanted it kept simple & elegant. By the way, the colour in this post is more the real colour, rather than what is in the previous post. 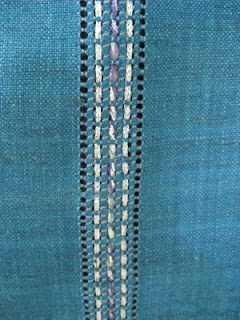 Now all I have to do is hem my skirt, & make a top to wear with everything. I better get cracking.
at 11:53 am 4 comments: Links to this post 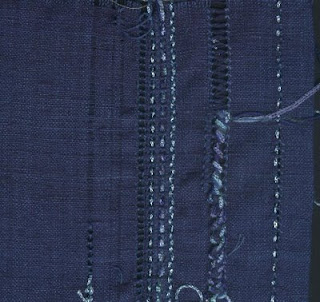 Away from the garden now & onto the stitching front, I have been making slow progress on I wrap that I want to make. Last year I purchased a piece of blue raw silk to make a skirt and had rather a lengthy strip left over down the side . So I thought I would draw some threads out, & make myself a wrap to wear with the skirt. The pic above is of my experiments with different stitches & threads, but alas, is nothing like the true colour. This pic has way too much red in it, while the real piece is more blue with a slight touch of green. Anyway, the real thing is nearly finished, and there should be a pic soon. 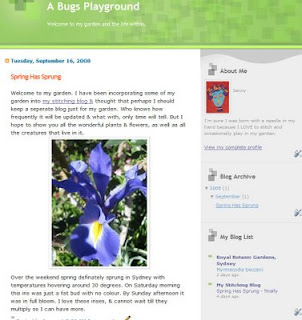 When I first set up this blog over two years ago, I wanted it purely to show off my stitching to the world. Over time, parts of my garden have shown up on it as well, especially in my last post. So yesterday I made a decision to keep both my garden & my stitching seperate, and started another blog just for my garden. I am not sure how often it will be updated, only time will tell.

After officially recording the coldest August in 60 years, spring has finally arrived in Sydney. Currently we are on 25 degrees, the warmest day in quite some months. So to herald the sunshine & the warm weather, I thought I would share with you some of my garden. 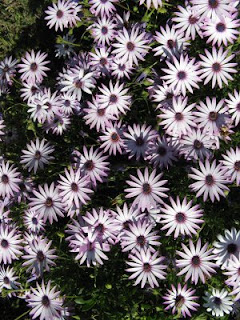 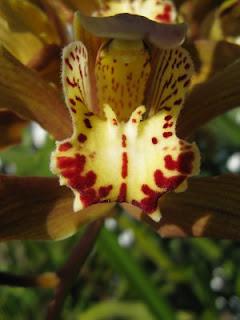 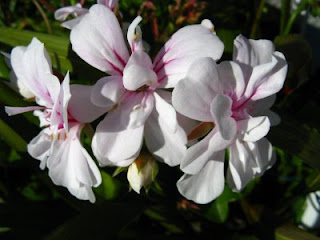 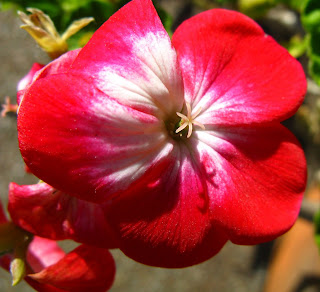 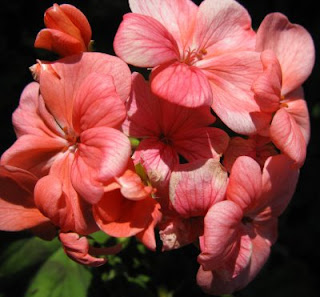 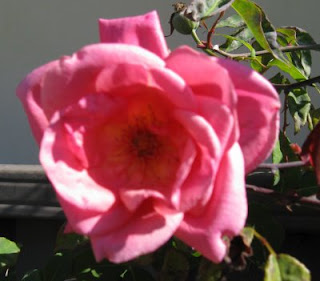 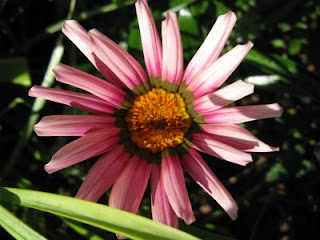 Over the last few days I have had a wonderful discussion with Norma on Stitching Sisters about bobbin lace, so I thought I would share what I have done so far.
I was introduced to this craft over 25 years ago by a work collegue at the time. I had to send to England for supplies as there were no suppliers in Australia at that time ( or so I was told). I managed to work 2 samples of various stitches in my lunch hours at work before falling pregnant with my eldest son & shelving eveything for nearly 20 years. As I played around in the textile world more, ( with kids in tow), I realized that it was lace that made my toes curl more than anything, all forms of it. So a few years ago I decided that everthing I did the following year would involve lace in some way. Come January, I recieved in my letterbox a news letter from my local craft store (now sadly no more) advertizing none other than bobbin lace classes!
So I signed up for 2 terms of lessons, then had a few more private lessons, and finally joined the local lace group which meet once a month. Through this group I discovered the Australin Lace Guild & found out about Lace Days at Linnwood.
So below are my total pieces of bobbin lace that I have made over the years ( minus one that I gave to a dear friend). These first ones are my first samples, going from right to left. My first sample was in Perle thread, then progressed to tatting thread which is much finer. In the far left samples I learnt spiders & gimps. 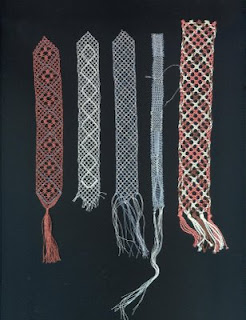 This next ones show various grounds, spiders, diamonds & more ginps. 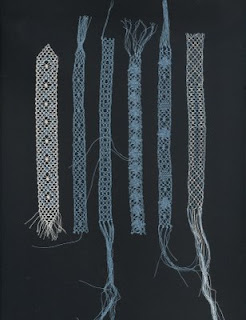 This next one shows more spiders, various fans, a footside edge and square tallies. 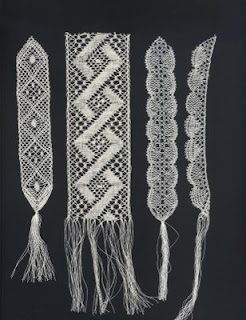 And this final one is my square corner sample which is mounted to some fine cotton voile. At the moment my pillow has this snail trail on it in black Gutermann silk machine thread. I am totally bored to tears with it but really must get it finished & off my pillow so I can do some more. I think I will have to go back to the beginning and start again as it has been so long since I have done most of the grounds, spiders and tallies that I have forgotten how to do them. Maybe after the wedding.