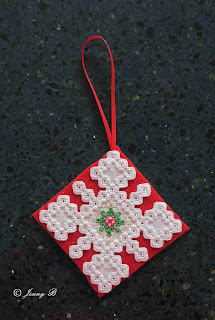 For the last few years, I have made a new little Christmas decoration to hang on our tree. I usually make around twelve of them to give to family and special friends. This year I made some Hardanger snowflakes.

I found the pattern fee on the internet, and worked it on some Belfast linen that I had in my stash. The trickiest part was cutting around all those tricky little corners. Then I just cut a square of red felt and sewed them on, with some added red ribbon as a hanger. This is the fourth one i have worked in the series.

As the snowflakes were worked on the bias, and I had cut a strip of the linen to work them, I had little spaces un-stitched. They were just big enough to make some tiny little decorations. I Played with different fillings on them all. even weave linen is too expensive to waste

All of the snowflakes are with their new owners, and some of the little ones have new homes too. I wonder what decoration will happen for next Christmas?
at 9:19 am No comments: Links to this post