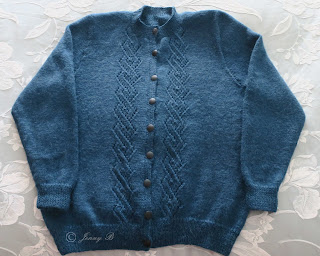 My latest finish, a warm winter cardigan for me.It's been made in Bendigo Woollen Mills Savanah 8 ply. which is 70% wool and 30% alpaca.

I made a jumper for a male member of the family back at the beginning of last year, and ran out of yarn to do the neck band, so had to order more. I knew that I would never get the same dyelot, and I only needed one ball, ( the ball size is 200 gms) so thought I would order enough to do something else with.

At the time I had plans to make a blanket, one of those half fabric half crocheted ones, but that went by the wayside  and I decided to make myself a cardigan instead.

The pattern is from my Paytons Classic Cardigan book, and then I just added a pattern up the front from my Knitting Dictionary 900 Stitch Patterns book.

It's warm, it's comfortable, and I had a devil of a time trying to find buttons that would suit.
at 1:16 pm No comments: Links to this post 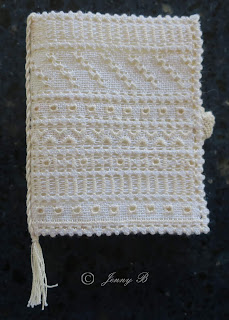 This little needle case was born out of a demonstration.

I was asked to demonstrate at an exhibition of works by Laura Leverton and Christina Barton, held at 76 Queen Street Gallery in Concord West. The exhibition was mostly pulled work, and I was just beginning to experiment with pulled work. What to do?

I looked through my fabrics, and found a scrap of linen that I thought would work. It was only small, so I had to set it in some fabric that would then let me put it in a hoop to work. Now what to stitch?

I had Googled some ideas, and came up with just stitching straight lines of stitching, so off I set. I left enough room for a hem, and started stitching.

There is some satin stitch in there, lots of four sided stitch, and lots of eyelets. My favourite row is one with half eyelets that gives a negative space of a zig zag line. My second favourite is one which combines all three of these stitches, and was inspired by the work that was on the walls.

I hemmed it with a four sided hem, lined it with some cotton fabric, added some Doctors Flannel, a hand made twisted cord, tassel and toggle closure.

Wallah! My new little needle case is now in use. 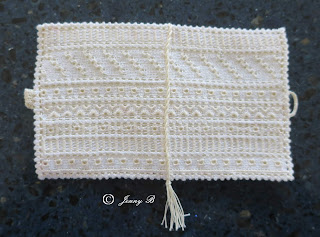 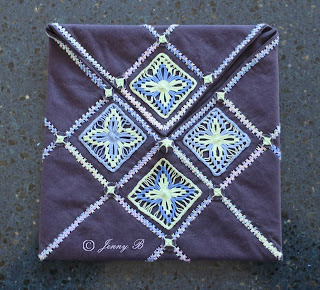 Way back in 2016 the creative stitching group I belong to ,Stitchers Plus, had a challenge for the year to work 2" squares. My mind went instantly to working tenneriffe lace in a square format, it was something that I had wanted to try for a while.

I played with a few different designs which can be seen here , and settled on one that I liked so decided to make more.

The problem was what to do with them. A friend had suggested that I make a 15 sided biscornu, and I remember thinking 'why not?' So off I set to make 15 of the same designed little squares, just in different colour ways. I think I made ten before I  started to think how I could put this pin cushion together. The squares had been on exhibition, and in that process had been mounted to navy card to keep them flat and show off the colours to best advantage. To make the pincushion, I would have to take them off the card and mount them onto something else. I needed something rigid to help hold the shape, and everything I thought of was not pin friendly, so I needed to think of something else to turn them into.

I thought of one of those  square shaped bags that were traditionally from Central Asia, so bought some navy linen, interfaced it, carefully sewed a square, turned it through and folded it to shape, only to find it didn't sit quite square. Oh well, it would have to do. I found out later that all my friends who have made them have never got them quite square either.

So, the bag made, I then stared to add on my tenneriffe squares for decoration. I had a plan, but the plan didn't quite work, the squares were just too big to do what I wanted. I could only fit four of them on, and then they went on crooked, and the bag still looked incomplete. So then I decided to add some interlaced herringbone. Mmmm... remind me not to do this stitch ever again!I knew the stitch had to be worked carefully, and I'm sure I did it right, but when I came to do the interlacing, some of it worked, some of it didn't. If I don't tell anyone they won't know 😃😃.

The bag talked to me as I worked the interlace herringbone, and I kept adding rows of it. The issue was that where the joins met was not the best. So I decided to cover them up. I vlysafixed two layers of the linen together, cut some small circles and stitched them over the joins using woven wheel. Looks much better.

Then I needed a closure, so I made a covered button using the same linen with another woven wheel for decoration.

It's finished! Yay! My fifth UFO done for the year.

This little book mark was born form spotting a scrap of fabric in a bag on my coffee table. It was left over from making some Christmas decorations, but not big enough to make another one. It was big enough, however, to make a book mark.

What to do? Firstly it needed a buttonhole edge to finish it, and I had a thought I would work a needle lace edge later. I have found over the last few years that I find straight buttonhole stitch edging a little boring. It just needs a little something to add to it.

OK, so the buttonhole stitch was done, now what? I needed some inspiration so looked in a few books to see what inspired. I spotted a lovely edge of two rows of 4 sided stitch with bullions angled in a zig zag worked in between. This would do. I am so used to counting by four, I left only four threads between the two rows of 4 sided stitch. It really needed more, possibly at least six threads to make the bullions stand out, and then it may of been too wide for this little book mark. A lesson learned for next time.

So once this row was done, I was left with a blank space in the center which needed to be filled. Back to my book for some more inspiration. I spotted some bullion flowers that would work nicely, so spaced them out evenly,  then worked a row of satin in between, also decorated with bullions.

The little book mark was cut out, and I decided to only put a small amount of needle lace in the corners, rather than all the way around the edge. Then I made a tassel to finish it off.

I am quite happy with my new little book mark and do intend to use it.
at 8:37 am No comments: Links to this post