A Mother of the Bride Dress 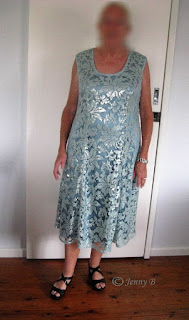 After some discussions recently on an on-line sewing group I am in, I realized I hadn't shown you all the Mother of the Bride dress that I made towards the end of the last year.

This lady was supposed to make it herself, but she was running out of time and asked me to do it. She had already bought the pattern and the fabric, so what could be so hard?

Mmmmmm............. The fabric was sequinned, something I hadn't really sewn with before, and the pattern, well don't get me started on that! It had seven, yes seven, horizontal seams in the skirt alone, then more in the bodice! The idea was that parts of the dress were left sheer, and the way this was achieved was to cut the fabric, and back only parts with lining. Mmmmmm.......... this might work on some fabrics, and be very pretty too, but not on this lovely sequinned fabric.

My first thought was to reverse engineer the pattern back to a basic shape to reduce the number of seams. This proved to be a nightmare, and I thought it would be easier to pattern make it from scratch, so I did. After many discussions with the client, we took out all the horizontal seams, and put in panel lines. The original shape was kept and the panel lines let me control the fitting, as well as give her the flare on the skirt that she wanted.

OK, so pattern done, toile fitting well, the lining was made and fitted well. I proceeded to lay the patterns out  carefully on the lace, only to find it was a one way design and needed to be cut singly. I had made 1/2 patterns that are used when we cut things on a fold or mirror, so now I needed to make double patterns to make sure there was enough fabric.

I had assumed there was enough fabric, and when I placed all the patterns out, I was missing one panel!  I tried placing them down the length of the fabric as well as across the fabric, and still there was not enough fabric!This was not possible! The mother of the bride could not go to her daughters wedding with one panel missing from her dress! OK, so I needed to find a solution.

Solution 1 - buy more fabric. Fabric stores that sell this type of fabric will not sell  just 30 cms more. Besides, the client had bought all the shop had.

Solution 2 - reduce the flare. This helped a little, but not enough.

Solution 3 - make it shorter. At the clients request, I had made the length 15 cm longer than the original pattern, so I started folding up all the hems by 10 cms, and yes, it made a difference! I could cut all the pieces!

Remind me not to sew with sequins again. Once I cut into the fabric, I had sequins everywhere!

The dress only had two layers, the lace and the lining. That was all the client wanted. That only left me with binding the armholes and the neckline as a finish.   I had planned to bind the seams of the lace with organza as well, but this actually looked awful so they just got over locked, it looked so much better. I had been panicking about the hem, and in the end I faced it with the organza.

Overall I was happy with the final effect, but not as happy as the client. She was over the moon. Would I make another sequinned dress again? Probably, especially if the client would pay me more. My thanks must go out to Christine M for all the help and advice she gave me over the phone.