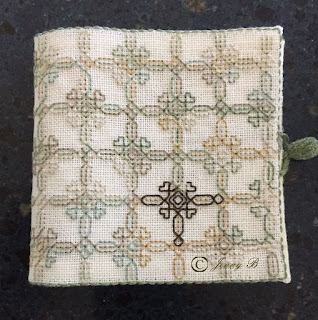 This little needle case started out way back in 2012! It began life as a sample of stitches for another piece I was about to do. It's been packed away since then, and I found it again by accident looking for something else.

It was all packed away with the threads I had been using to work it, and a little note to turn it into a needle case. So that's what I did.

I just had to find some Doctors Flannel, and some fabric to line it, both of which I had. I had an idea to make a twisted cord to add to the edge, but instead worked a back stitch around the edge in one of the colours used in the stitching.

It also needed a closure, so I made a little toggle out of some rolled cotton tape which then got covered in detached buttonhole stitch.

So another UFO is done and dusted. Watch this space to see which one is next.
at 3:18 pm