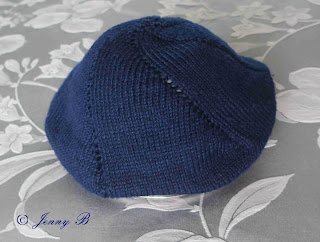 Behold, my new winter hat.  Mmmm..... winter is long past in my part of the world, in fact this week it will be more like summer. But next week, I will be heading for parts that will be a tad colder than home. I have winter hats of course, so why did I do another one?

I had made this blanket, and in the process had to look for some yarn to do a border. I found ten balls of navy acrylic yarn in my stash and used only part of one doing the blanket border. What to do with the rest? I had obviously earmarked it for something, but who know what that was now. So I dug out my double pointed knitting needles and decided to make a new hat to take away. It's only acrylic, so if it gets lost, it's no biggie. I still have my nice woollen ones.

So my hat was born. I started with six stitches on the needle, joined into a round, and just knit, increasing six times on every second row. I continued this way until it was big enough for what I wanted, knitted another two rounds, then decreased until it fit may head. Finally I added a ribbed band. No pattern needed, just winged it.

Its a beret style hat, a bit slouchy which is how I like them. It's navy, my base colour for clothing, and its warm. So it will serve the purpose of what I want.