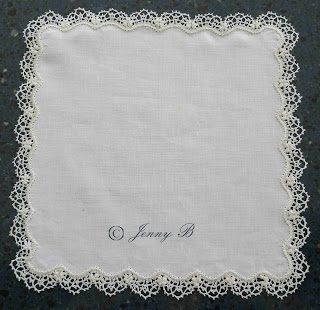 It's been a very long time happening. from the first day I contemplated making it, until the day it was finished, it has been nearly eight years. Mmmm..... that is a long time, but there are prickings to draw up, handkerchief linen to source & buy, decisions to be made about thread, threads to source & buy, decisions about how big to make the pricking, then sourcing and buying a lace pillow to work it. Then we get to the actual working of the lace itself, which took me about two years. I might add here that there have been plenty of other projects happening over the same time frame.

Lets start at the beginning. Quite some years ago I acquired a book called 'Bedfordshire Lace-making' by Pamela Nottingham. When I looked through the book, my toes began to curl in absolute delight. Another lace-maker I knew also had this same book , and as it was set out in lesson format, we decided to work through it together. I might add here that that challenge has long gone as life has got in the way for both of us. I have still continued on in my own time though.

For the lessons up to this point, I had only done samples, and I was tired of making samples. I wanted a finished project, so I decided to make this edging into a handkerchief .There was lots of learning involved, from using slubby linen thread, to making even tallies ( yeah right!) and working six pair crossings to make those little flowers. Then there was the joining. The little flowers were certainly a challenge, and there are no two alike. Someone told me it is just as in nature.

I was advised to use a linen thread, but in reality I may just not ever use it again. The slubs made it difficult to tension, especially in those tallies. It also snapped a lot, meaning there are joins in my edge everywhere. I was told that linen thread is the traditional thread used in Bedfordshire lace, but recently I was told that a lot of Bedfordshire lace makers now use cotton thread. Mmm...... something to think about for the next one.

There are 224 tallies in this edge. I have been told that I have to make 1000 before I can get the right. I think I have a few more to go. The next ones will be in a cotton thread I am sure.

Once the lace was finished and joined, I then had to mount it to my linen fabric. I had a few different suggestions as to how to do it, but chose something called 'Nun's Stitch' to mount it. I had to find out how to do it, then learn how to do it, but in the end it was easy, and it gave a little pinstitch along the edge which is pretty.

It may not be perfect, but the mistakes and inconsistencies in it show that it is hand made. I am extremely proud of what I have done. It is my first ever bobbin lace handkerchief edge that I have done and there will be more. Watch this space!

Wow, congratulations! The times I thought I would like to learn, got the stuff (the book, the pillow), but I think I had always been put off by the time it all takes. No patience :-(
So, well done! :-)
xx

That is (can not spell the word I want here!!!!!) BEAUTIFUL!!!!! You have done a wonderful job on this project and who cares how long it took?? You have made magic and it shows in all the beautiful stitches and just how lovely it looks. Thanks for sharing this with us. Love it. And you deserve a great cup of tea and all the joy of just knowing this ones done, while you dream of #2....... :-)

Looks so nice! How did you attach the lace to the hankie? By hand, with a zigzag stitch on a machine? I've made some lace, but I'm not sure about how to attach it. Glad to see that someone else figured it out. Thanks.

Hi Carolyn, thanks for your comment. The lave has been attached by hand using something called Nun’s stitch